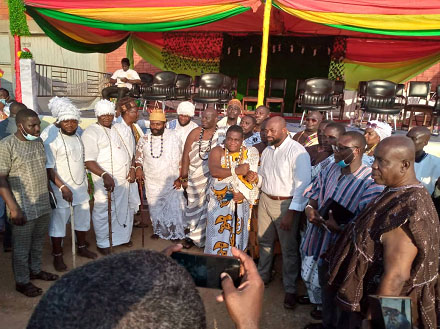 ElectroChem Ghana Limited, a subsidiary of the McDan Group, has proven to be worthy executors for the employment oriented project, taking into account its machinery capacity.

The Mining Lease Agreements for the Ada Songor Salt Project was given to Electrochem Ghana Limited by Parliament, as the mineral rights to dig for, mine and produce salt in the areas specified in the agreement for a term period of 15 years.

Paramount Chief, Nene Abram Kabu Akuaku (III), in his address, stated that “we struck good fortune in 2017, when I enstooled Dr. Daniel McKorley of McDan Group of companies as a Development Chief of Ada for his constant help for the traditional area.

He thanked the government for accepting his request by working tirelessly on the processes, and sent three mining lease agreements on the Ada Songor Salt Project through the Minerals Commission and the Ministry of Lands and Natural Resources to Parliament for ratification.

“On my behalf, the Ada Traditional Council, the sub-chiefs of the towns and villages, elders, youth and people of Ada, I want to express our profound gratitude and appreciation to His Excellency the President, Nana Akufo-Addo, for this kind gesture.

“We have a 15-year mining lease agreement from the government but we initially have to contact the traditional leaders and opinion leaders to make sure there wouldn’t be trouble; and that, we did some month back; we went back to Parliament for ratification and it had been ratified, so we are on-site to work.

“The chiefs and the 10 clans would also get a modern palace complex with offices and conference rooms,” he noted.

The Ada area accounts for about 1.4 million metric tonnes.