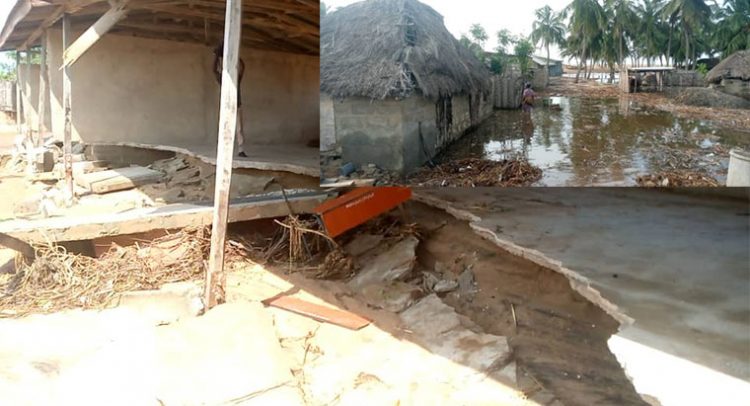 Victims of the recent destruction caused by tidal waves along several coastal communities in the Volta Region have expressed disquiet about the many unfulfilled promises to curb the yearly devastation by the ocean.

According to the victims who span three districts; it was clear that the government was not interested in protecting them and their children from the danger that the tidal waves.

Last Sunday (November 7, 2021) at 3:00 am, about 4000 residents in about eleven communities along the coast from Anloga through Keta to the Ketu South Municipality were displaced by tidal waves; thus the rising of the sea level.

Since March this year, Salakope and Amutsinu have been the most affected by six tidal wave incidents, but this latest incident spanned the three districts. In Anloga, the communities affected include Dzita, Agbledomi, and Fuveme. In all, about 211 houses were affected with about 1185 persons displaced.

Keta Municipality also saw Keta Central, Kedzikope, Vui – Tettehkope, and Dzelukope Afugo communities affected. About 160 homes with 1500 residents were displaced. Followed by Ketu South which saw about 200 homes being affected at Agavedzi, Salakope, Amutsinu, and Adina. Over 1400 residents including children were affected here too.

The incident which they described as the most devastating in the last three years, saw the seawater flooding their homes, schools, and other properties to the waist level. Many of them had to perch with relatives, stay awake throughout the night or sleep in uncomfortable places and beddings like tables and walls.

At Dzita in Anloga District, an eco-friendly hospitality facility, the Meet Me There African Home Lodge was not spared. The management refunded the fees paid by guests and evacuated them due to flooding. Residents of Salakope and Amutinu in the Ketu South Municipality have had to exhume the corpses of their relations to re-burry them as the sea has taken over their cemetery.

About two basic schools have been closed down due to the devastation. Final year Junior High students who are to write their Basic Education Certificate Examination (BECE) in about a week are distraught as their studies have been truncated. Many of the affected residents are crying for food and some basic items like clothes, blankets, and tents.

Mr. Francis Asenso-Boakye, the Minister for Works and Housing at a press conference last Monday, November 8, 2021, sympathized with the residents in the three districts and assured them of the government’s commitment to complete the second phase of the Blekusu Coastal Protection Project (Sea Defence wall).

The 42-kilometer Blekusu to Adina sea defense project which began in 2016 at the cost of $40million saw the reclamation of about 420,000sqm (103 acres) of land in phase one. The first phase which was completed in July 2019 covered Havedzi-Horvi, Blekusu, and part of Agavedzi, all in the Keta Municipality.

The second phase, which has been delayed, will cover the other part of Agavedzi then Salakofe, Amutinu, and Adina in the Ketu South Municipality. It will entail the construction of 37 armor rock groynes, with land reclamation, to protect eight (8) kilometers of coastal stretch.

He said, “The Ministry is currently engaging the Ministry of Finance to raise the needed funding for the implementation of the second phase.” Apart from protecting lives and properties, he was hopeful that the project “will protect the beaches and its environs against encroachment by the sea, arrest the current environmental deterioration, mitigate the social and economic consequences of beach erosion, and strengthen the economic and production base of the area through enhanced fishing activities.”

However, responding to the promise of the Minister, the Assemblymember of Salakope and Amutsinu electoral area, Sylvester Kumawu said, “Enough of the Promises. The residents no longer believe these promises because this is not the first and will not be the last. What they want to see in action on the ground.”

The Chief Fisherman of the area, Emmanuel Anum Tetteh said “It is not necessary to be demonstrated, because we have done that so many times. I do not know what else to say after many interviews by the media for the past three to four years. Only empty Promises. They should stop talking and work.”

He recounted a visit by the Works and Housing Minister in April where a similar promise was made; that work will start on the sea defense before the end of the year. Yet, that has not materialized. 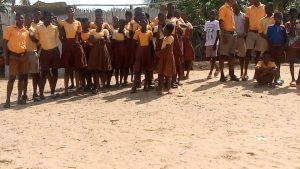 As of the time of filing this report, the National Disaster Management Organisation (NADMO) has assessed the situation and promised to get relief items to residents by the close of Tuesday, November 9, 2021. With the help of pumping machines and nature, the seawater which also covered the streets of some of the affected communities has receded.

The Municipal Chief Executives of Keta, Emmanuel Gemegah and Ketu South, Maxwell Lugudor in responding to the plight of residents that they needed food and shelter, said, plans are far advanced to relocate some of the residents to higher grounds while a permanent solution is put in place. They also appealed to philanthropists and other organizations to complement the support from their respective assemblies with food and other items.