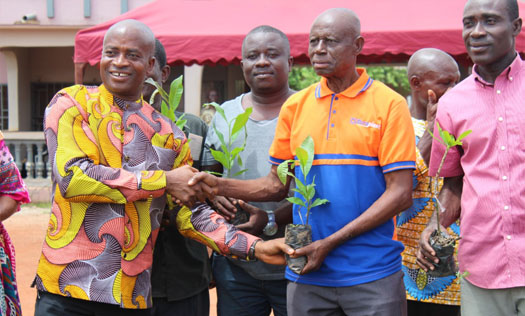 MORE farmers are being supplied with improved tree crops seedlings like cocoa, cashew, oil palm, coffee and mangoes as part of efforts by the government towards the agenda of Planting for Export and Rural Development.

More than 1,500 cashew farmers in the Sunyani West District of the Bono Region for instance were yesterday supplied with 140,000 improved cashew seedlings.

The government expect the farmers to improve their yields for export and also provide raw material for the one district, one factory initiative.

Each farmer received 80 seedlings and they were happy to receive the input. The beneficiary communities include Fiapre, Odomase, Chiraa and Nsoatre.

Handing over the seedlings to the farmers at the forecourt of the Sunyani West District Assembly, the DCE for the area, Martin Obeng encouraged the beneficiary farmers to work hard to make the project sustainable.

He said government is putting in place measures to establish cashew marketing board to be responsible for pricing and marketing of the produce and urged them not to be discouraged by the current price.

The DCE said each district has chosen types of tree crops for planting and the Sunyani West District was concentrating on cashew and oil palm.

“The assembly has engaged a private seed grower to nurse and supply 140- 150, 000 improved cashew and oil palm seedlings to be supplied to 1,500 farmers in the district,” he said.

The district director of Agriculture, Gilbert Sophia who supervised the distribution of the seedlings said the farmers would be assigned with extension officers to assist them employ technology in planting to get maximum yields.

He advised the farmers to create fire belts around their farms to prevent bush fires during dry season.