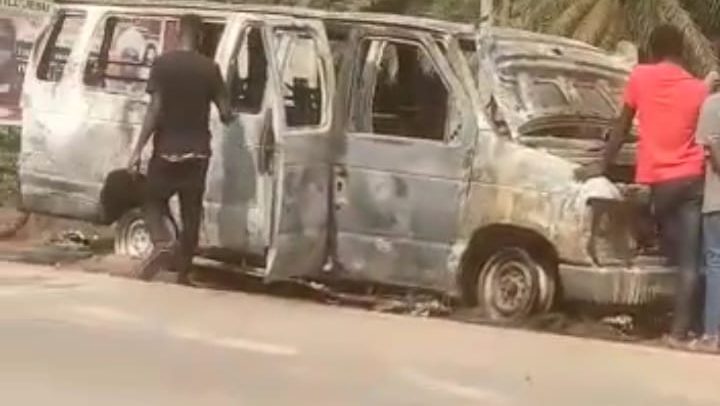 Some people traveling from Tarkwa in the Western Region to Accra in a minibus narrowly escaped death after the bus caught fire in the early hours of Sunday, 12th December, 20121.

It is unclear what caused the fire which razed the bus beyond recognition.

The incident occurred near the Axle load joint at Apimanim in the Ahanta West Municipality of the western region.

Some of the passengers onboard claimed that the fire started when a burst tyre was being replaced.

Though no life was lost, DAILY GUIDE gathered that luggage and some vital belongings of the passengers perished in the fire.

An eyewitness told journalists that the Accra-bound minibus was fully loaded with passengers and on reaching Apimanim, one of the tyres of the bus burst.

The driver stopped at a location close to the Axle load joint at Apimanim to fix it, but suddenly the vehicle caught fire.

According to sources, no casualty was recorded as personnel from the Ghana National Fire Service (GNFS) were called to the scene to help quench the inferno which burnt the vehicle beyond recognition.

I don’t have a girlfriend, I'm scared of women – Zubby Michael