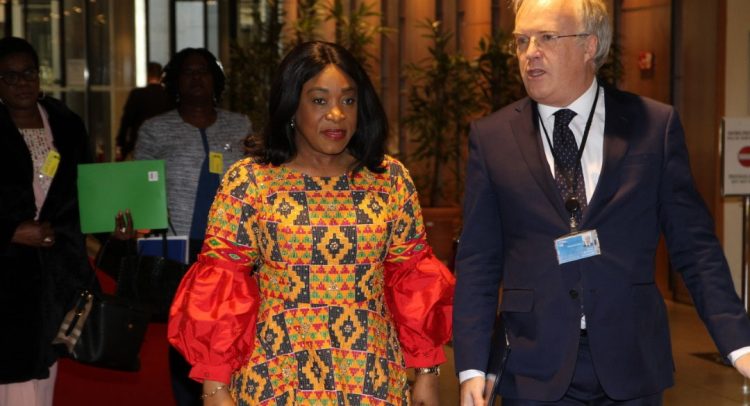 Minister for Foreign Affairs and Regional Integration, Shirley Ayorkor Botchwey, has called for a concerted effort from global leaders and state actors to provide a safer internet environment for children around the world.

The Foreign Minister made the call in her address during a High-Level Conference in Brussels to celebrate the 30th Anniversary of the Convention on the Rights of the Child (CRC) under the theme: Protecting the rights of the Child in an ever-changing digital world: threats and opportunities.

She explained that “there is no doubt that the fast changing technological and digital world presents us and, in particular, the child with a two-sided coin of increasing threats and ever-expanding opportunities.”

According to her, “the digital world provides children and young people with multiple opportunities for education, entertainment and discovery.”

Digitalization, internet and associated technologies have already impacted and transformed the lives of global citizens at an unprecedented pace and scale, she added.

Madam Ayorkor Botchwey added that “today’s child also has his/her life completely integrated into the digitalized world through the internet and associated technologies.”

According to her, these innovations can be key enablers for the future of the child as they serve as platforms for equal opportunities to thrive, so that no child is left behind.

She explained that records show that millions of children are online every day using digital devices such as smartphones, laptops, tablets and USB flash drives, which are not necessarily harmful to the child and have led to lots of positive developments.

However, she lamented that the dark side of today’s digitalized world has exposed the child to major risks and threats online than can be anticipated

She lamented that the prevalence of these online threats to the child can derail steps being taken to achieve the UN Sustainable Development Goal 16.2 which calls for an end to all forms of violence against children by 2030.

The Minister added that “fellow panelists will agree that the vast opportunities that the digital world avails to the child should not be allowed to be watered down by the associated threats.”

She stated that “this can be achieved if key stakeholders such as governments, regulators, internet service providers, civil society organizations and NGOs join hands to prioritize child online safety.”

The Minister explained that “a safer internet for children will contribute significantly to help prepare our future generations to survive in the digital space.”

Meanwhile, the Minister urged the challenges confronting children because of the changing nature of armed conflicts around the globe demand that more measures are taken to punish impunity and those who violate children’s rights are held accountable.

She noted that over the past couple of decades, there has been a decline in inter-state conflicts worldwide.

These have been replaced by smaller-scale, low intensity intra-state wars, she said.

According to her, these types of conflicts pose threats to children because they involve mainly non-state actors with ill-trained combatants armed with readily available small and light weapons.

“These armed groups usually fight for economic reasons such as control over natural resources, ideology or religious beliefs and have been known to freely abuse the rights of children,” she said.

She bemoaned that terrorism/violent extremism and counter-terrorism also continue to pose challenges for the protection of children.

In communities where these armed conflicts occur, the Foreign Minister said, civilians particularly women and children are mostly the victims.

Civilians are killed, inflicted with unimaginable psychological damage and family systems are broken down, according to her.

Besides these, she added, communities are destroyed and mainly women and children are displaced.

These intra-state armed conflicts also serve to normalize violence and sow seeds of future armed conflicts, she asserted, adding that consequently, children living in communities involved in armed conflicts can be victims of physical attack, landmines, sexual abuse, displacement, separation from parents, nutritional deficiencies or even recruited into armed activities.

“It also requires a different approach, one that no longer focuses on particular countries or themes but rather on the entirety of issues affecting children caught in armed conflicts,” she urged.

She stated that other key measures necessary to address the impacts of armed conflicts on children rights and future will be by: peace building and conflict prevention, ensuring universal compliance with international norms and standards, prioritizing the protection and care of children in armed conflict and strengthening leadership and institutional capacity, and mainstreaming of a child-rights approach in all development planning and implementation.

She emphasized that achieving the objectives of the Convention largely depends on the ability of the key actors (state parties) to mainstream child-rights approach in all levels of development planning and implementation.

“Child-rights must not be seen as an afterthought or ignored in the development planning and implementation process but rather essential in giving meaning to the tenets of the Convention as contained in Article 3, which among others enjoins the State to protect the best interest of the child,” she said.

“The mainstreaming of the child-rights will also underscore the key principle of the 2030 Agenda for the Sustainable Development Goals of not leaving anyone behind,” the Minister added.

According to Hon Ayorkor Botchwey, child-centered agenda must be integrated at the level of policy formulation, budget allocation and implementation process as well as monitoring and evaluation stages of the development process.

“Again, key elements such as children’s interests, perspectives, vulnerabilities, capacities as well as rights should be considered at the relevant levels of development planning and implementation,” she said.

In this vein, the Ghanaian Foreign Minister believes there is the need to build the capacity of institutions and relevant service providers to factor the peculiar interests and needs of the child in the development process.

Furthermore, the Minister explained that the active participation of the child in the development planning and implementation was necessary in matters concerning children

“The child must be seen as a key player in the process and his/her views respected,” she urged.

According to her, other stakeholders in the process should appreciate that the child has the right to express his/her opinion freely and to have the opinion taken into account in any matter or procedure affecting the child.

This, she added, will contribute in achieving a child-right friendly environment as contained in the spirit of the Convention.

The Foreign Minister was a participant at the just ended commemorative event to celebrate 30 years of the United Nations Convention on the Right of the Child in Brussels.

Basic-Needs Calls for Inclusion of Mental Health On NHIS