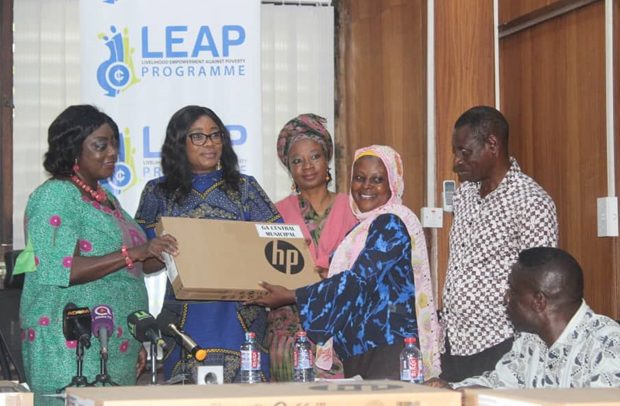 The Ministry of Gender, Children and Social Protection has presented 206 laptop computers to district social welfare officers across the country.

The move seeks to aid the collection of data particularly on the Livelihood Empowerment Against Poverty Programme (LEAP).

Presenting some of the laptops to district officers in the Greater Accra Region at the premises of the Ministry in Accra, Cynthia Maamle Morrison, sector minster commended the officers for the work they are doing in helping the most vulnerable in society leap out of poverty.

She said her interactions with the beneficiaries show that with little push more people under the programme can be financially self sufficient to allow for vulnerable people who are not on the programme to be supported.

“Most of them are using the money to engage in small businesses like soap and gari making, so it means that if we get the right data we can give them a substantial amount of money to do that business so they can leap out of poverty,” she noted.

Mrs. Morrison encouraged the district officers to improve on the current data they collect so a case can be made for substantial support for those who need it most.

Assistant Director of LEAP, Myles Ongoh, in a short remark expressed gratitude to the ministry particularly Mrs. Morrison for her tireless effort in ensuring that the social welfare of the population is taken care of.

He said the laptops will be put to good use by the district social welfare officers.