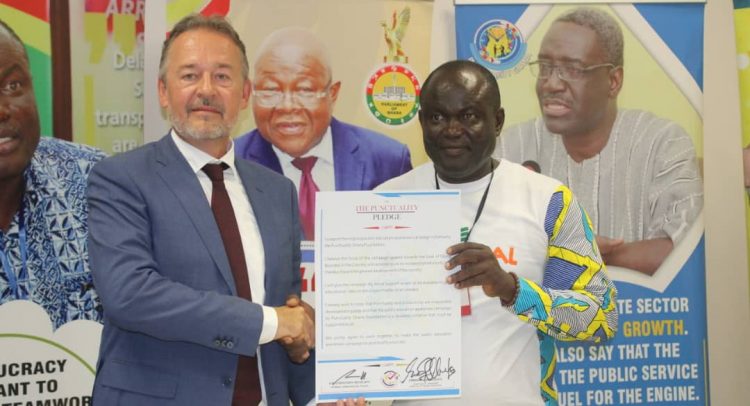 The German Embassy in Ghana has signed on to the punctuality public education awareness campaign, lending its support to the activities of the Punctuality Ghana Foundation.

The endorsement which was witnessed in a short ceremony at the offices of the German Embassy in Accra was to court the support of development partners in addressing the poor attitude towards time management and work that greatly slows down the country’s development.

Lead Punctuality Crusader, Emmanuel Amarquaye, in his remarks before the signing of the endorsement form, said Germany has a proven record of being punctual and hardworking, an attribute which informed the decision of the foundation to seek their support in the punctuality campaign.

“We strongly believe that punctuality that leads to productivity is the key that Ghana and Ghanaians need to unlock our economic prosperity; and if Germany has led the way, there is nothing wrong in learning from them,” he said.

He said it was time citizen resort to giving their loyalty to the state by being productive which starts with punctuality.

“We believe and convinced that punctuality linked with productivity has the potential of boosting government revenue which is very critical to our development,” he added.

He said the foundation will be undertaking various awareness programme aimed at inculcating the habit of punctuality back into the Ghanaian society.

“We will be conducting punctuality and productivity assessment survey, data collection on the causes of lateness by public and civil sectors, punctuality walk and float,” he said.

German Ambassador to Ghana, Christoph Retzlaff, in his remarks said the issue of punctuality has two perspectives first is respect for the person you are going to meet.

“In Germany we have a popular saying that punctuality is the curtsey of the kings that means that if you are punctual you respect the curtsey on the people you lead,” he said.

He added that not being punctual is seen as rude and disrespectful in Germany.

He further noted that for a modern society and a developing one like Ghana not being punctual would simply be an enormous waste of productivity and loss of efficiency if everyone came late to appointments.

Ambassador Retzlaff again stressed that being punctual is a very important prerequisite for a functioning state.