Ghana Gets 58 In Tobacco Index Report 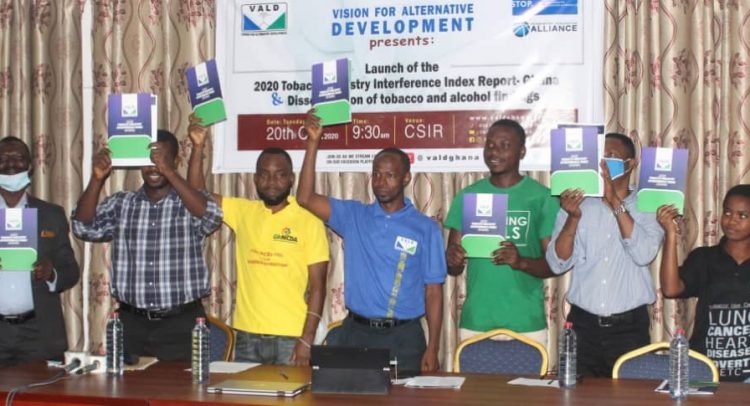 Partners and volunteers with the report at the event.

A new report on the extent to which the tobacco industry influences government’s tobacco control policies has scored Ghana 58 points for the implementation of tobacco control measures.

According to the first Global Tobacco Industry Interference Index Report developed by the Vision for Alternative Development, although Ghana’s policy efforts to control the use of tobacco have been progressing, it is slow and far from satisfactory, hence the score.

The tobacco index report, the first of its kind, presents findings on the tobacco industry interference of the government’s attempt to develop tobacco control policies, strengthen measures to control tobacco use, and the overall implementation of the World Health Organization Framework Convention on Tobacco Control (WHO-FCTC) and its protocols.

Programme Director for the Vision for Alternative Development, Labram Musah, presenting the report, said globally, interference by the tobacco industry has been copiously demonstrated to be a major affront to governments’ attempts to implement the WHO-FCTC and its protocols.

He stated that although the country has signed and ratified the WHO-FCTC and gone ahead to adopt and enact specific protocols  like the passage of the Public Health Act 2012 (851), there has not been any further regulation of tobacco and tobacco products following growing concerns about the rising tobacco use and the devastating effects.

“There is also laxity on the part of the government to raise taxation on tobacco and tobacco products despite the incessant push and clarion calls made by CSOs in Ghana… government has not made any policy on attempt to increase taxes on tobacco for the past 5 years (2015-2019) an incentive to promote the business of the tobacco industry,” he said.

The report therefore called for the strengthening of the interagency-multi-sectoral committee with resources to develop and implement enforcement mechanisms to control tobacco use in the country.

“Develop a code of conduct to guide public officials when interacting with the tobacco industry. Develop programs to regularly increase awareness of public officials and agencies on FCTC Article 5.3,” it said.