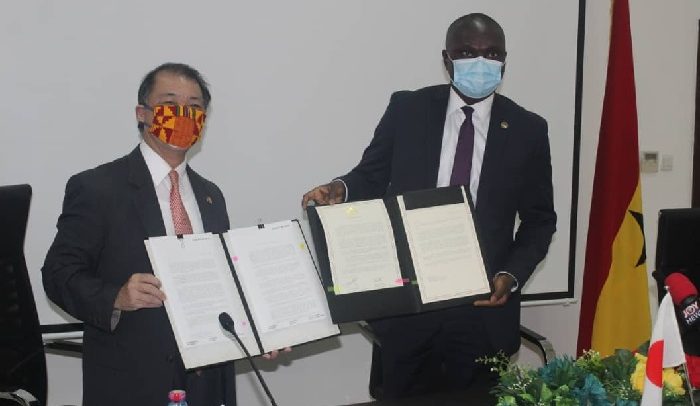 Ambassador Himeno Tsutomu and Charles Owiredu with the signed agreement.

The government of Ghana has signed a $1,000,000 (109 million Yen) grant assistance agreement with Japan for the phase two of the Tema Motorway roundabout project.

The grant will be used for the construction of flyovers at the arterial roads in Tema to alleviate traffic congestion and improve the business environment.

The project builds on the magnificent high-quality phase one Tema roundabout project which was financed with a grant of $56 million (six billion Yen) secured from the Japanese government and commissioned by President Akufo-Addo on June 5.

The phase one comprised a two-tier intersection, a tunnel in the east-west direction, four kilometres of improved roads, four pedestrian bridges, one at each approach to the intersection, and the construction of several drainage structures.

Japanese Ambassador to Ghana, Himeno Tsutomu said: “This Grant Assistance is the showcase of the strong Japan-Ghana friendship and partnership.”

He noted that it was the wish of the people and the government of Japan that this project will make a valuable contribution in the area of road infrastructure.

Deputy Minister for Foreign Affairs and Regional Integration, Charles Owiredu, said the phase two of the project, which is scheduled to commence in the fourth quarter of this year, would see the transformation of the parallel two-tier interchange into a three-tier one to further improve the turnaround time at the interchange.

Besides the Tema Motorway Roundabout project, the Deputy Minister said the Japanese government is also supporting Ghana in the construction of a new bridge across the Volta River on the Eastern corridor, among other ongoing projects in the country.

“It is my hope that the projects, when completed, would ensure safe, efficient road transportation and contribute to the efficient flow of goods and services,” he added.

I'm Not In ICU- Carlos Ahenkorah 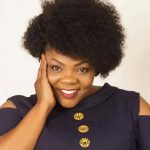 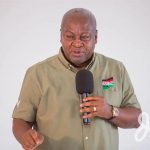