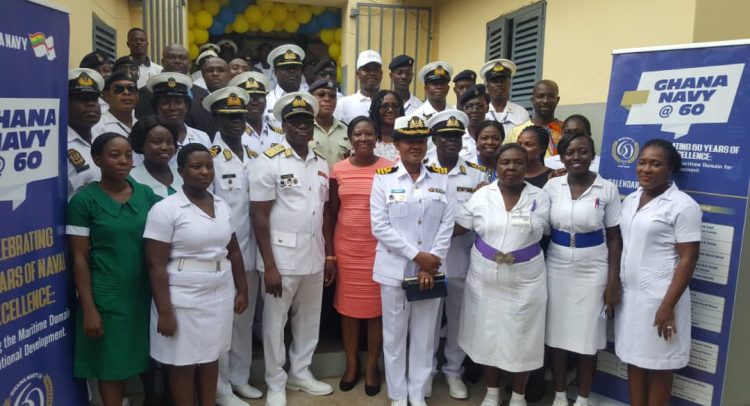 As part of the celebration of its 60th anniversary, the Ghana Navy has renovated the Infirmary Ward B block of the Accra Psychiatric Hospital.

The navy also donated a number of mattresses to the inmates as part of their humanitarian activities.

At a short handing over ceremony held on the premises of the hospital in Accra, the Chief Staff Officer (CSO) at the Navy Headquarters, Commodore (Cdre) Issah Yakubu, revealed that the renovation works cost them GH¢ 50, 000 and it took a month for work to complete.

He said the renovation involved re-fixing the deplorable roofs and ceiling of the ward, painting and tiling of some parts, of the block.

“It is appropriate for the Navy, who are funded by state resources, to use part of their funds to cater for other less fortunate citizens of the state and that is what we are resolve to do as soldiers, “ he added.
Cdre Yakubu also indicated that the Eastern Naval Command (ENC) in Tema, was scheduled to undertake another humanitarian work, having already presented goods and cash to the Akuapem School of the Blind,while the Western Naval Command (WNC), Sekondi, also prepares itself to donate to an institution of their choice, as part of the Diamond Anniversary celebration.

Speaking on behalf of Accra Psychiatric Hospital, Dr Amma Boadu, said the Ward B. had its facilities such as the ablution rooms, virtually broken down, thus unusable.

“Other areas including the rooms, rest rooms were all in deplorable states but the Navy came in to assist renovate the place for us and we thank them.”

She revealed that the health facility has become a home for most of the inmates but the funds to put it in good shape was unavailable, hence the need for other individuals to also support the hospital and the inmates.

The Ghana Navy was established by the first President of Ghana, Osagyefo Dr Kwame Nkrumah, on 29th July, 60 years ago, and the Navy has evolved to be a regional maritime force to be reckoned with, providing security at the nation’s maritime boundaries, as well as protecting oil field installations of the country offshore.