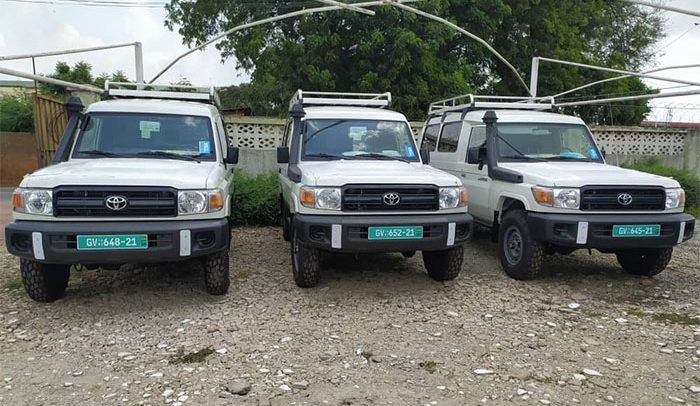 Minister of Health, Kwaku Agyeman-Manu handed over the Toyota Land Cruiser brand fitted with vaccine refrigerators to the Director-General of the GHS, Dr Patrick Kuma-Aboagye at a short ceremony in Accra.

Mr. Agyeman-Manu, said the vehicles purchased by the government from B Medical Systems would complete the national last mile distribution chain instituted to ensure that everybody, regardless of geographical location, had access to vaccines and other medical supplies and reduce wastage.

He said with adequate vaccines in the system, the cold chain transportation facility would help to accelerate the delivery of the country’s herd immunity of at least, 60 % population by the close of the year.

“Vaccines are such that if not stored and transported according to their cold chain requirements, they will go bad within the shortest time, and this is what we want to avoid. We have targeted not to waste more than five per cent of our vaccines,” Mr. Agyeman-Manu said.

He said the country was scaling up its vaccination protocols adding that unvaccinated individuals would be denied access to some public places, including places of worship, and applauded churches and mosques for cooperating in the enforcement of the safety protocols.

“I cannot hide my excitement and joy after seeing these vehicles that we were looking for even earlier than now. They are to support our national vaccination activities, one of the pillars of our response, to limit and eventually stop the spread of the virus,” he said.

Director-General of the GHS, Dr Patrick Kuma-Aboagye, said the country was racing against time to avert a fourth wave.
He said the role of the vaccine transportation cold chain could not be overemphasised because it would help to rapidly deploy the vaccines to everybody.

At some of the villages, they wait for the farmers to return from the farm before they start vaccination, and so these vehicles would not only help to transport the vaccines but store them adequately until they are deployed,” he said.

CEO of B Medical Systems, Luc Provost, expressed excitement in the partnership with government adding that the company has been at the forefront of fighting Covid-19 nationwide.

“The company has cooperation with Toyota to ensure vaccines reach every level of the population”, he noted.