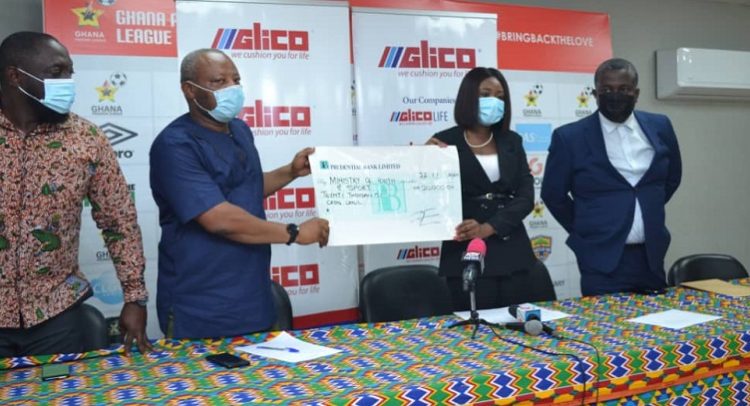 GLICO yesterday presented a cheque for ¢20,000 to the bereaved families of the infamous Offinso accident victims.

The accident claimed seven young footballers’ lives, and according to officials of the insurance company, their love for sports in the country stirred them to rally support for the bereaved families and the injured players.

At the presentation ceremony in Accra yesterday, Kukua Apprey, Head of Corporate affairs, GLICO, said, “As a pacesetter in the country’s  insurance space, GLICO Group believes that it is our company’s purpose to protect and support Ghanaians by cushioning you all for life.

“…The Offinso incident really touched our hearts at GLICO. Half of this amount we intend will be used to support the bereaved families, while the other half will be to support the families of the injured and recovering.”

She added “…Covering our sports men and women needs to be treated with the utmost importance and urgency. We believe the sports Ministry and the Ghana Football Association (GFA) would come on board, as we at GLICO collaborate with them on this.”

Officials of the Youth and Sports Ministry and the National Sports Authority (NSA), who received the cheque, commended GLICO for the gesture and promised to share the financial package evenly.

A total of 34 members of juvenile side, African Vision Academy (including 16 players on-loan from Sky Academy), were on board the vehicle that crashed into a river few weeks ago.

Six of the young footballers died on the spot, while one who was in a critical condition died at the Komfo Anokye Teaching Hospital in Kumasi.

Ten of the victims were treated at the St. Patrick’s Hospital and have since been discharged.