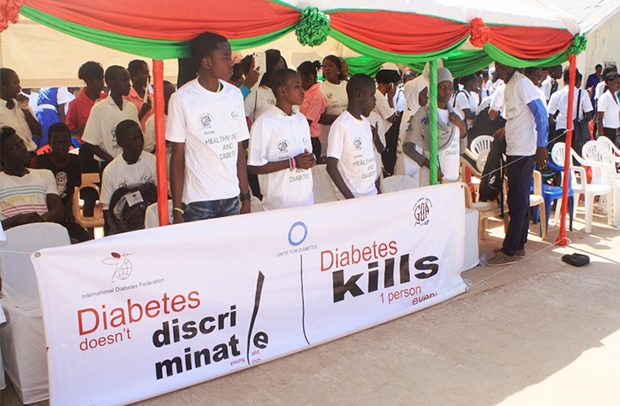 The exercise, under the theme “Education to Protect the Future”, is aimed at sensitising the youth on the symptoms, causes, and solutions to diabetes in Ghana, with a special emphasis on nutrition.

Speaking to the media on the sidelines of the activity, the President of the Ghana Diabetes Association, Elizabeth Esi Denyo said that majority of Ghanaians especially the youth have diabetes but are unaware, a situation she described as a critical health problem and a major cause of death in the country.

“We have launched this year’s World Diabetes Day at various marketplaces across the country to screen traders and create awareness on the effect of the diabetes disease to reduce the rate of death recorded as a result of the disease.

“Persons with diabetes are advised to stick consistently to their medication, visit the hospital regularly, exercise regularly, and adhere strictly to diets recommended by their physicians,” she said.

The GNDA also called for a new emphasis on diabetes health education in schools and humanitarian assistance to combat the staggering toll inflicted by the disease across the country where millions have diabetes and millions more are not properly diagnosed, storing up a silent future medical crisis.

Madam Esi Denyo, who doubles as the Chairperson for the International Diabetes Federation (IDF) West Africa, further made a passionate call to the government and the health directorates to intensify diabetes healthcare in the country.

“Diabetes care needs attention because it is a bit neglected but killing more people than coronavirus these days. There is no fund and guidelines for diabetes management in Ghana. We don’t have any plan so government must intervene to help reduce the death rates,” she added.

The beneficiaries who spoke to the paper expressed their gratitude to the Ghana Diabetes Association and its partnering sponsors for the screening exercise, calling on other benevolent organisations to support the association in screening and creating diabetes awareness in the country.