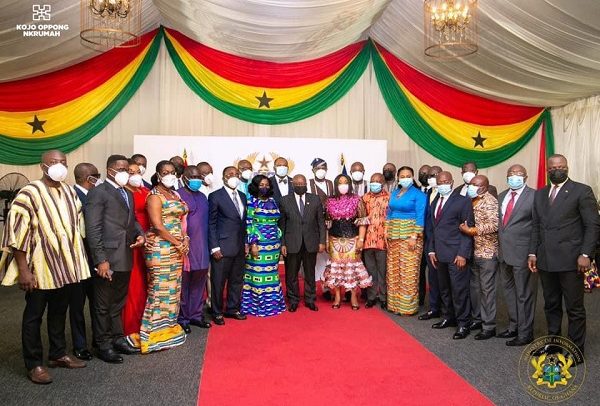 The government of Ghana is holding a two-day retreat for the newly appointed ministers.

President Nana Akufo-Addo is leading the retreat at the Peduase Presidential Lodge.

The retreat started today, Sunday, March 7, will end on Monday, 8, 2021, paving way for the first batch of ministers to assume office on Tuesday, March 9, the same day President Akufo-Addo is expected to deliver the State of the Nation Address.

On Friday, March 5, 2021, the President administered the oath of office, secrecy and allegiance to 28 out of the total number of 30 ministerial appointees.

With the exception of Finance Minister designate, Ken Ofori-Atta who is out of the country on medical grounds and yet to be vetted, the Minister for Chieftaincy and Religious Affairs, Ebenezer Kojo Kum who had gone through and have been approved was also not present on grounds of ill health.

Moments after swearing them inPresident Akufo-Addo charged Ministers in his second term administration to work harder to improve the living standards of the citizenry.

The swearing in ceremony was held at the Jubilee House, the seat of the nation’s presidency.