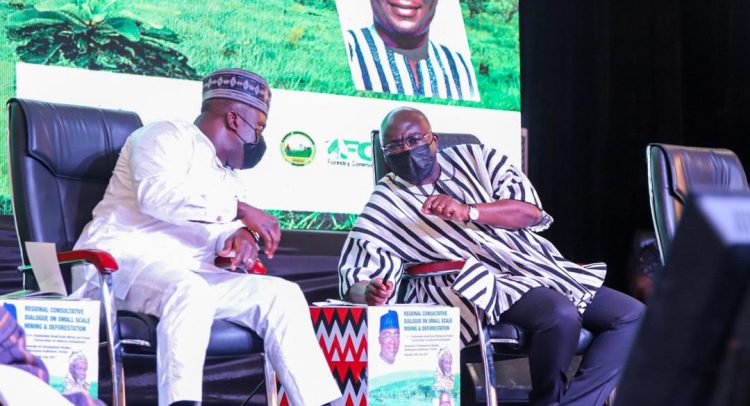 The Vice President of Ghana, Alhaji Dr Mahamudu Bawumia says government will continue to ensure good governance in the exploitation of Ghana’s forest and mineral resources without fear or favour.

The Vice President stated this when he opened the second Regional Consultative Dialogue on small scale mining and Deforestation held in Tamale, today 19th July, 2021.

Dr. Bawumia said issues relating to the exploitation of Ghana’s Natural resources are part of “Our National Life, which must be insulated from Partisan Politics”.

The Paramount Chief of Kumbugu Traditional Area, Alhaji Iddrisu Abu, who represented the Yaa Naa, described the theme for the Regional Consultative Dialogue “Sustainable Mining and forest conservation for National Development” as fitting and appropriate and called for strict enforcement of the emergency interventions by government including the deployment of the military to safeguard the forest reserves and water bodies.

He also bemoaned the dangerous habit of cutting down trees for charcoal particularly economic trees such as shea, dawadawa and ” redwood”.

The Sector Minister, Samuel A. Jinapor reiterated the government’s policy on small scale mining, which is to build a responsible, viable and sustainable Small-Scale mining industry which rejects practices that compromise the environment.

He announced that government is formulating a comprehensive Alternative Employment and Livelihood program for illegal miners affected by current cleanup in the sector.

On Forestry, he reiterated the directive on the ban on Rosewood exportation whether legally acquired or otherwise.

The project, he stated, will among others, address the drivers of deforestation and forest degradation and promote the cultivation of shea.

The Minister also expressed the hope that the Dialogue will help develop concrete measures to safeguard the environment for posterity.

The Tamale Dialogue brought together participants from other neighbouring regions including North East, Savannah, Upper East and West.