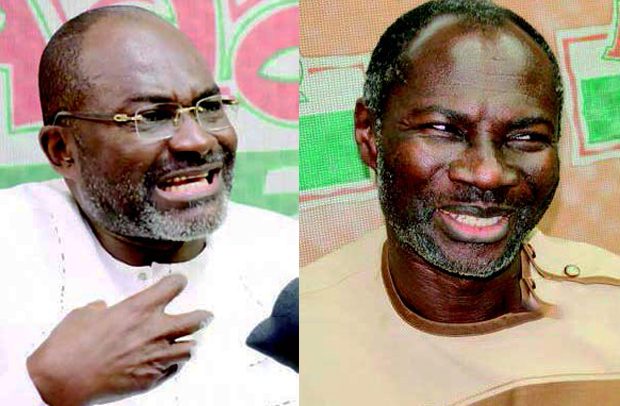 PROPHET EMMANUEL Badu Kobi, leader of the Glorious Wave Church International, has been exposed by the Assin Central Member of Parliament (MP), Kennedy Agyapong, for importing some luxurious cars into the country without paying excise duties to the state.

The ‘man of God’ has had the two luxurious vehicles – a Lincoln and a Porsche – seized by the Ghana Revenue Authority (GRA) officials.

In a video circulating on social media, a GRA taskforce was seen taking away the two luxurious vehicles, including a white Porsche Panamera with a fake licence plate, GS 1707-18.

The cars were reportedly being hidden in a house said to be located at Sakumono Estate, Accra, where Prophet Badu Kobi’s church is located.

The GRA officials noted that information reaching them indicated that both cars belonged to Prophet Kobi.

They said their machine had detected that two luxurious cars were imported into the country without import duties.

According to them, they were not aware as to whether the vehicles were stolen cars, stressing that they had impounded the vehicles because they were imported into the state without import duties.

In spite of not paying duties, Prophet Kobi is said to have managed to get number plates for his vehicles from the DVLA.

The New Patriotic Party (NPP) MP for Assin Central in the Central Region, Kennedy Agyapong, claims he recently assisted the GRA officials to seize the cars at Sakumono.

Mr. Agyapong said after the operation, he was the one who tipped off the GRA officials about what he called Prophet Kobi’s “criminal activities.”

He said Prophet Kobi had been importing luxurious vehicles into the country without paying duties and that had been the stock-in-trade of the prophet for several years.

He said Prophet Kobi, who was noted for cruising in plush-looking vehicles in Accra, managed to import more cars without paying duties when the National Democratic Congress (NDC) was in power and said the prophet relied on his strong links in the NDC, especially with the then President Mahama, to import cars without following laid-down regulations.

The MP said although Prophet Kobi’s NDC was no longer in political office, he was still importing luxurious vehicles into the country without paying duties “but it has reduced a bit now.”

According to Mr. Agyapong, Prophet Kobi consistently used his pulpit to malign President Nana Addo Dankwa Akufo-Addo without any justification and he (MP) decided to investigate why the prophet had so much hatred for the President, saying “I realized that he was attacking the President because his car business is not flourishing since the NDC is not in power.”

“President Nana Akufo-Addo has not offended Badu Kobi in anyway, yet he always attacks the President because he won the 2016 polls and it is destroying his illegal car importation business.”

According to him, immediately he started to dig Prophet Kobi to see if he was indeed a genuine man of God, several people willingly came out and freely gave information about Kobi’s “deeds”.

“People freely gave information about him to me. I learnt that he always imported cars without paying duties and the NPP’s victory in 2016 was rapidly collapsing his business so he was angry with Nana Addo,” he pointed out.

“You are not clean and yet you decide to use your pulpit to attack a clean man like Nana Akufo-Addo. Now look at what you have done to yourself…,” adding, “I don’t hate Badu Kobi; I am doing this because he attacked Nana Akufo-Addo, also I want to put my life at stake to expose bad people in the system for a better Ghana in future.”

Mr. Agyapong said Prophet Kobi was a “con man”, who duped people and took their monies and assets, adding “one of Badu Kobi’s victims has opened up to me. Such a thief has the audacity to insult Nana Addo!”

The MP said Prophet Kobi had since sent emissaries to him for ceasefire and said he had told them he would only accede to their request if the Prophet paid the duties on his vehicles.