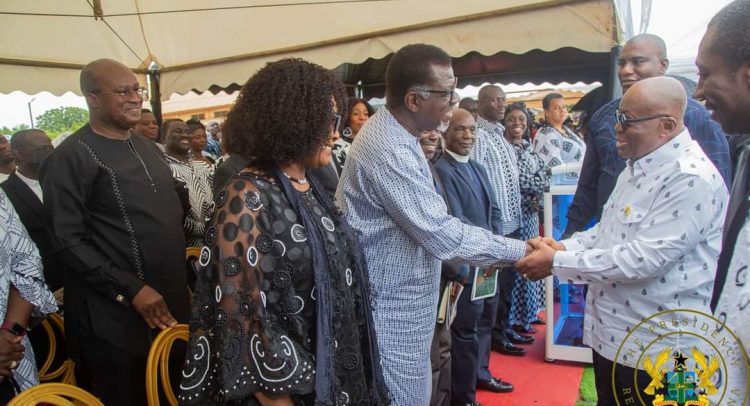 The mortal rremains of former National Chairman of the governing New Patriotic Party (NPP), Harona Esseku has been laid to rest at Senya Beraku, in the Awutu Senya West constituency of the Central Region on Saturday, 1st October 2020.

A strong delegation including the current and former National Executives of the NPP attended the funeral to bid farewell to the late founding member.

The funeral also saw a strong delegation of government officials, regional, and other party members including hundreds of party sympathizers led by the President and National officers who thronged the funeral ground.

In a glowing yet emotional tribute, President Nana Addo Dankwa Akufo-Addo described Harona Esseku as a strong and committed member of the tradition.

According to the President, the late Esseku “never wavered in his attachment to the ideas and the historic political purposes of the New Patriotic Party and its predecessor parties to build a prosperous, democratic state in Ghana, which respected human rights, the rule of law and the principles of democratic accountability.

“He was an honest man. He spoke his mind, always, directly on all issues. He was never a temporiser, and was never one of those who waited to see where the conversation was going before speaking. He would always give his honest, frank views, and I respected him very much for his attitude and for his pronouncements.

“The NPP and Ghana have lost a stalwart servant, but we are hopeful that we shall meet Harona Esseku again in Heaven.”

On the part of the party, NPP described the late Esseku as, “a pre-eminent leader and a man of unquestionable integrity whose selflessness and commitment to the founding principles of the Danquah-Busia-Dombo Tradition cemented his name in the annals of the party.”

The late Esseku, a founding member of the NPP, became chairman of the party from 2001 to 2005.

In the Second Republic, at age 35, the late Esseku became the youngest Cabinet Minister, who was in charge of Transport and Communications in the government of Kofi Abrefa Busia.

His political career started in 1968, when he was elected by the people of Awutu, Effutu, Gomoa and Agona, to represent them in the Constituent Assembly, during the drafting of the constitution of the Second Republic.

When the Progress Party was founded in 1969, Esseku was one of the members, and in the elections that took place on August 29, that year, he was returned as a Member of Parliament for the Awutu-Effutu-Senya Constituency.

At the onset of the Third Republic, he became a founding member of the Popular Front Party (PFP), and later a member of the steering committee of the party.

The late Esseku was a beneficiary of the member of the Order of the Star of Ghana award, conferred on him by the then President John Agyekum Kufuor in 2007.