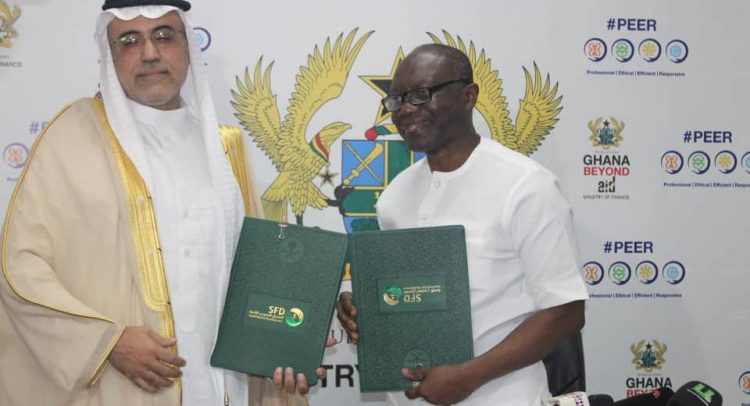 The Saudi Fund for Development has signed an agreement with the Ministries of Finance and Health for the release of Saudi Riyal (SR) 75,000,000, equivalent to $20m loan for the construction of health projects in the Upper East Region.

The concessional loan agreement between Ghana and the Kingdom of Saudi Arabia, would help to supply the installation of medical equipment to the Adjunct Clinical Block at the Bolgatanga Regional Hospital in the Upper East Region.

Minister of Finance, Ken Ofori-Atta, signed for Ghana while the Vice Chairman of the Saudi Fund for Development, Khalid S. Alkhudairy, signed on behalf of the Saudi Kingdom.

Mr. Ofori-Atta in his remarks before the signing ceremony, said the provision of the concessional funding in the health sector was in line with Government’s vision of ensuring that every region had an ultra-modern secondary referral hospital.

“This would help to bridge the geographical gap in healthcare delivery as well as serve the under-served and unserved communities for the purposes of primary referrals whilst taking advantage of medical tourism with neighboring countries,” he noted.

Mr. Khalid, on his part, said the Kingdom of Saudi Arabia was happy to support Ghana to achieve its agenda of providing basic healthcare for her citizenry and contribute to universal health coverage.

“We look forward to the day of commissioning and inaugurating these projects and we admire the step by the Government of Ghana to cooperate with Saudi to promote its health sector,” he said.

Minister of Health, Kwaku Agyeman-Manu, said the implementation process would soon follow to roll out the project and completed within the stipulated schedule.

The loan has an interest rate of 1.0 per cent per annum and a tenor of 30 years as well as a grace period of 10 years and a repayment period of 20 years.