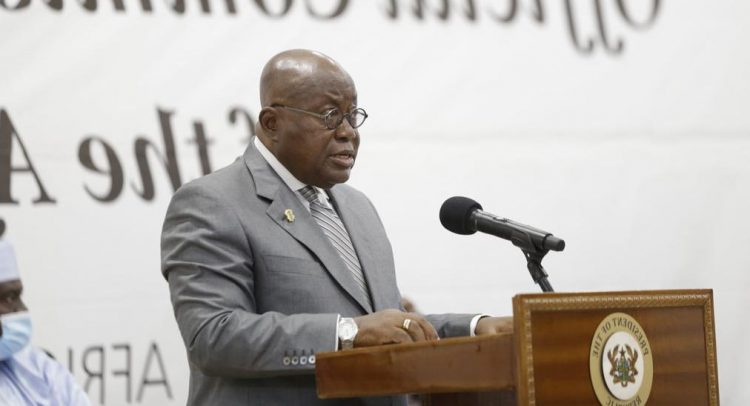 PRESIDENT AKUFO-ADDO has charged researchers and policy makers to come up with actionable proposals that will help African leaders to propel the continent to rise above its current dependence on aid, asserting that the time has come for Africa to take its rightful place on the world stage.

According to him, the concept of Africa beyond aid “is about acknowledging that we have to develop in a sustainable manner, recognising that we must take the bull by the horns and take responsibility for our sustainable growth, while perceiving our fellow African countries as key stakeholders in our own development.”

Addressing participants at the 22nd Academy of African Business and Development (AABD) conference in Accra yesterday, President Akufo-Addo expressed optimism that conferences such as the AABD would provide opportunity for citizens of the continent to rethink Africa’s development trajectory, as well as explore other critical issues of importance on the continent that require immediate attention.

He said citizens of Africa appear to have missed out on many opportunities to make the continent “rich and resilient”, but noted that “it is not too late to right the wrongs” and catch up.

“It is time to create the future we want for our continent and it is time to start building that future inspired by the imperative to transform our economy from raw material producing and exporting economies to value adding industrial economies,” the President stressed.

He pointed out that the time had come to pursue a path of prosperity and self-respect as a continent, and suggested eight thematic areas he believes the participants of the AABD annual conference could focus on.

President Akufo-Addo said chief among them is to ensure that proceedings from the conference contain actionable proposals for consideration, focusing attention on the IMF’s unprecedented SGR reallocation for which Africa’s share is $33 billion.

For him, this is much less than the $100 billion promised in the 2019 Paris summit intended to provide additional financial resources to address the vast and surging inequities the pandemic has revealed.

He also said it was his expectation that participants would articulate policies that will help strengthen African financial institutions such as the African Development Bank, Afrexim Bank, and the Africa Finance Corporation to enable them take over greater responsibility for the financing of Africa’s development.

He also charged the conference to advocate debt cancelation for African countries to provide sound foundation for future progress, while proposing measures to help increase significantly the continent’s capacity for domestic revenue mobilisation with the average tax to GDP ratio in West Africa for example, standing at 18% and at 14.3% in Ghana, as opposed to the OECD’s average of 34% for its member states.

President Akufo-Addo said this will help African countries to finance their development potential, create opportunities for the vibrant and dynamic youth and deliver improved livelihoods for their respective citizens.

It will again help in re-evaluating the role of foreign credit rating agencies, which act as gatekeepers to global capital markets, and their modus operandi including the fixing of the so-called Africa risk premium.

The conference has delegates from across the African continent and they are expected to deliberate on issues relating to over 14 thematic areas, including Accounting, Finance, and Investment; International Aid, Economic Policies and Strategies; Entrepreneurship, Small Business and the Informal Sector Exporting, Internationalisation and Foreign Direct Investment; Information and Communication Technology (ICT) and Digital Transformation; and COVID-19 and Business in Africa.