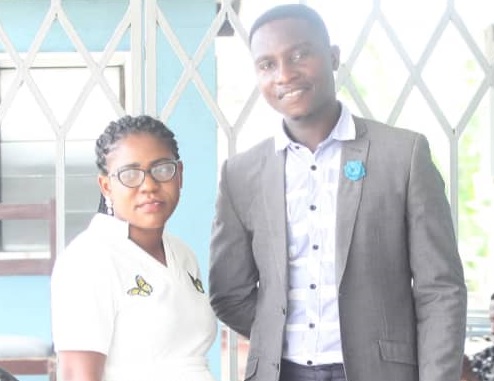 Josephine Panyin Mensah and her husband

More details are emerging about how the supposed heavily pregnant woman who claimed to have been kidnapped in the Western Region, sending the security agencies on a wild goose chase, faked her pregnancy.

Josephine Panyin Mensah, who claims to be 28 years, has reportedly said she used silicone belly, a specially-designed object that depicts a protruded stomach to make a person look pregnant.

She also said she put in place the grand deception with the full support of her mother, Agnes Essel, aka Aunty Aggie, and the fraudulent scheme appears to have been designed on the blind side of her husband, Michael Kweku Simons.

As part of the scheme, she had created the impression that she delivered and her baby was taken by her supposed captors and even claimed initially that there were 10 other pregnant women ‘captured’ who were all killed, except her.

She admitted on Friday morning after being brought to Axim where she was found that “I am not pregnant. I was wearing a silicone belly.”

Josephine Panyin Mensah is also reported to have told the investigating team that she got pregnant for about four months but lost the pregnancy in the process.

According to sources, Josephine indicated that she could not find it easy to inform the husband that the pregnancy had been lost, and it was at this point she allegedly bought a silicone belly to create the impression that the lost pregnancy was intact.

“I wanted my husband to treat me well and that is why I faked the pregnancy and the kidnapping,” Josephine Panyin Mensah is reported to have told the investigating team.

Josephine is alleged to have further confessed that she was afraid to lose her marriage because her husband gave her nice treatment and extra attention during the four months of her ‘real’ pregnancy.

She is said to have informed the team of investigators that all this while, she had given her husband and her neighbours as well as people around her the false impression that she was pregnant and even indicated that the mother was aware of the grand design.

When asked by the investigating team whether she never had sex during and after wearing the silicone belly, her reported response was that she covered her fake pregnancy with a cloth during the said period.

She is allegedly reported to have gone into hiding at Agona Nkwanta in the Ahanta West Municipality of the Western Region, but did not know her fake kidnapping could receive so much attention all over the country and beyond.

The suspect is said to have pleaded with the police not to prosecute her.

It was based on the medical examinations conducted on the suspect at both Axim Government Hospital and the European Hospital, all showing she was neither pregnant nor kidnapped, that forced the police to probe the case further.

Police sources at the Western Regional Police Command have confirmed to DAILY GUIDE that all the necessary procedures to enable the police to solicit for the medical details and other relevant information about the lady, were followed.

The source said it is likely the alleged 28-year-old woman would be hauled before a court today, Monday, September 27, 2021.

When DAILY GUIDE visited the residence of the victim-turned-suspect at Amoono Road in Takoradi on Saturday at about 8am, some family members including the mother, Auntie Agnes, were in a crunch meeting planning the next steps the family would take.

Conspicuously missing at the meeting was the husband of the suspect and rumours going round the metropolis have it that the husband is shocked by the alleged confession by the wife.

It is also rumoured that the three-year-old boy who the husband claimed was their son, was rather brought into the marriage by the woman.

After the crunch meeting, the family members decided not to speak to any journalist and initially said, “If this man (reporter) has any questions on the matter he should go to the police station.”

However, after some few minutes, the mother, Agnes Essel agreed to speak and she outrightly debunked the assertion that her daughter was putting on a silicone belly.

“It is not true. When and where did my daughter say this? In fact, we do not believe all the alleged confessions because none of our family members were there to witness,” she yelled.

Later, the mother and some family members went to the Takoradi Central Police Station to visit Josephine.

At the police station, only the mother was asked to speak with Josephine who was languishing in the female cells.

Josephine was heard telling the mother she would drink water but those around could not see her face because she was sitting in an obscure corner in the cells.

The mother then went and bought a bottle of water and gave it to a female police officer who handed it over to Josephine.

When the issue started, the NDC elements started politicising it by attacking the Western Regional Minister, Kwabena Okyere Darko Mensah, who had said per the preliminary security briefings, neither the lady was pregnant nor was kidnapped.

One of the opposition NDC elements, Nana Oye Bampoe Addo, formerly Nana Oye Lithur, who is not even representing the suspect as counsel, attacked the police for being unprofessional in the lady’s issue.

She raised questions against the statement issued by the Ghana Police Service announcing that Josephine Panyin Mensah has pleaded not to be prosecuted after confessing she was not pregnant and also not kidnapped.

She accused the police of unprofessionalism on TV3/3FM last Saturday saying, “It is very disappointing that the Police had not acted professionally.

“They still have the bruises of the Takoradi girls’ issues and they are trying to show that they are working on this. But when you read the statement, they say they informed the family of Panyin Mensah but they did not.”

The former Minister for Gender, Children and Social Protection under John Mahama added, “For me, the most important and critical issue is Panyin Mensah, has she been given legal assistance? Was she informed of her right to remain silent?

“Under what circumstances were her confession procured? Who were the professionals there? Has she received psychiatric help? Has she received help from a psychologist? What is the composition of the team dealing with this case?

“Because there are mental issues, psychological issues and then there are also criminal issues,” she said.

Immediately the lady was reported to have been ‘found’, one of the surrogates who is claiming to lead the FixTheCountry campaign, posted on social media that he suspects the government is involved and it was being done as part of the grand scheme to scuttle their demonstration that was ongoing in Takoradi on Kwame Nkrumah Memorial Day.

“When we went to Takoradi, a lot of people told us that this story was planted to misdirect media attention from our demonstration. They said the woman will be found on the day of the demonstration as a way of again refocusing media attention away from the Tarkoradi demo,” he said, adding “I said that was hogwash. I said there is no way our politics can be that sinister. We are better than that.”

He then added, “to be perfectly honest, I am a bit baffled that people’s predictions came to pass to the T (sic). She was found on the same day of the demo; and now it turns out she was never pregnant. But I still insist that this whole thing is a coincidence and that Ghanaians have just become too cynical. Things are bad in Ghana, but they can’t be that bad. The woman looks visibly shaken! I hope she gets the care she needs. I encourage the Ghana Police who have a hard-won reputation to give the family justice and arrest the perpetrators.”

Immediately the Regional Minister disclosed that the security briefings he had was not in sync with what the victim-turned-suspect was churning out, NDC elements in the Sekondi-Takoradi Metropolis castigated the minister, who doubles as the Takoradi MP, for allegedly telling lies.

Some NDC activists in the metropolis, particularly the failed NDC candidate for Essikado-Ketan, Dr. Grace Ayensu Danquah, a member of the now defunct NDC Covid-19 propaganda team, wadded into the matter and described the statement from the minister as unfortunate.

She attacked the minister as if she had the capacity to issue that statement, saying, “It is unfortunate that before these investigations have been concluded certain government officials are issuing conflicting information. This is very disheartening and rather unfortunate.”

“Knowing the previous history and background of the botched missing Takoradi girls where the entire people of Western Region were given conflicting and confusing information from officials who should know better, the Regional Minister’s hasty statement (if true) is rather unfortunate and insensitive,” she added.

Pregnancy Hoax In The Land Of Jokers!