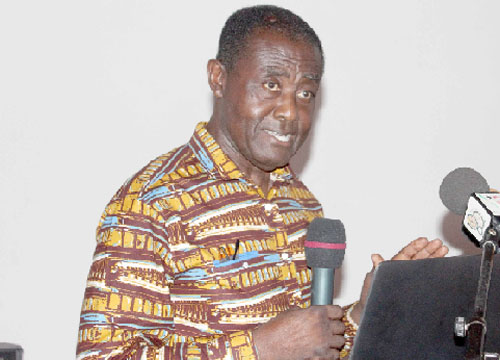 President of the Sickle Cell Foundation of Ghana, Prof. Kwaku Ohene-Frempong, has called on the Ministry of Health (MoH) to implement the National Programme on Newborn Screening for Sickle Cell Disease (SCD).

Prof. Ohene-Frempong, who is a sickle cell expert, disclosed that more undiagnosed sickle cell babies are dying before five years because the programme, which when implemented would ensure every child born is screened of SCD, is not being implemented.

Among others, the policy is to allow sickle cell facilities to administer early simple penicillin prophylaxis and other interventions that would prevent babies with the disease from dying and developing complications such as malaria and stroke.

The policy would also allow sickle cell facilities to administer early simple penicillin prophylaxis and other interventions that would prevent babies with the disease from dying and developing complications such as stroke.

“It is unheard of in medicine that simple testing and intervention can reduce mortality drastically but we have failed to implement the national programme adopted by the Ministry of Health,” he stated.

Prof. Ohene-Frempong said one in every 50 babies born has SCD, adding that fatality rate of these babies could go as high as nine out of 10 babies if undiagnosed.

“Babies look fine even when they are born with SCD, they do not get sick for several months so it is through the screening that we can diagnose and treat,” he revealed.

He explained that based on data of sickle cell screening of newborn babies at the Sickle Cell Centre at the Komfo Anokye Teaching Hospital (KATH) since 1995, “we have realised that as a country, we can reduce child mortality from about 80 to 90 per cent to about five per cent.”

Prof. Isaac Odame of the Sickle Kids Centre for Global Health in Toronto, Canada, said too many children were dying of the disease while “we wait to scale up” the project across the country.

“We ought to invest in making sure that in protecting the lives of these children we are providing them with good quality care to enable them to live long and contribute their share to our national economy,” he pointed out.

In 2016, the availability of funds from Pfizer Incorporated, a US-based pharmaceutical company, helped the two facilities to test 26,000 newborns for sickle cell disease.