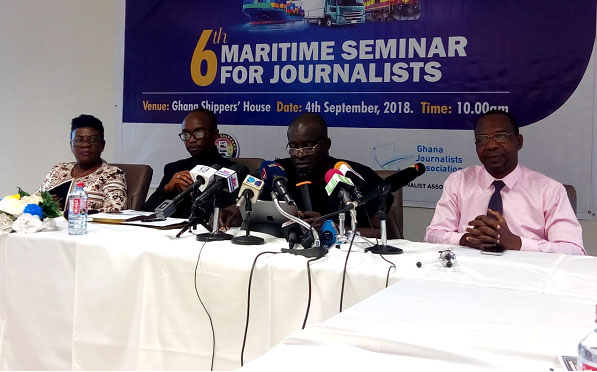 Titus-Glover (second right) speaking at the seminar while Alfred Monney (right), Bismarck and chairperson for the occasion, Kobina Ofosu-Appiah look on

Mistrust on the part of importers for clearing agents and freight forwarders is hampering the smooth implementation of the paperless regime at the country’s ports.

Assistant Revenue Officer of the Ghana Revenue Authority (GRA) Customs Division, Tema, Simon Kwesi Kumah, made this known at the 6th Maritime Seminar organized by the Ghana Shippers Authority (GSA) in collaboration with the Ghana Journalists Association (GJA) for journalists on Tuesday in Accra.

This year’s seminar, which was also attended by Deputy Minister of Transport, Daniel Nii Kwartei Titus-Glover, was themed: “Contemporary Trends and Developments in Ghana’s Shipping Industry.” It was geared towards improving the knowledge of journalists on current developments in Ghana’s trade and shipping sector.

Mr. Kwesi Kumah indicated that “the attitude of Ghanaians is not compliant with paperless regime at the ports.

That, he said, was because importers still continue to demand receipts from clearing agents.

According to him, freight forwarders or clearing agents are compelled to print receipts or documents for importers even though the whole system is supposed to run electronically.

He blamed the development on the ‘poor’ sensitization and public education conducted before the commencement of the system.

He also bemoaned the disproportionate number of Customs examination officers as compared to those of inspection agencies which was slowing down clearance processes at the ports.

“On the average, a Customs examination officer works on not less than 10 declarations a day, thereby overwhelming the performance of these two agencies culminating in the slowdown in clearance flow,” he said.

“Items which are not in commercial quantities, especially household consumables, which are declared among other commodities and demands involvement of these inspection agencies could be allowed to be examined by the Customs Chemist and released, if satisfied, to avoid delay and further cost to importers.

Chief Executive Officer (CEO) of GSA, Benonita Bismarck, said the Authority considers the dissemination of relevant information on shipping related issues to shippers and other stakeholders as very significant in fulfilling its mandate.

“It has therefore become imperative that media practitioners who are the conveyors of such critical information to the public are regularly empowered through seminars of this nature,” she said.

The journalists were educated on the implementation of paperless transaction in Ghana, the effect of demurrage on the cost of doing business at the ports, improving trade facilitation via port expansion and port efficiency and transit trade through Ghana’s corridor.

To that end, she said the GSA would launch a shippers App to provide real-time information on charges in the ports, vessel arrivals, maritime statistics, contacts and locations of shipping lines and agencies, industry news, a platform for shipper enquiries and complaints among others.

President of GJA, Roland Affail Monney commended the Authority for organizing the seminar, saying such capacity-building events were key for the professional development of journalists.