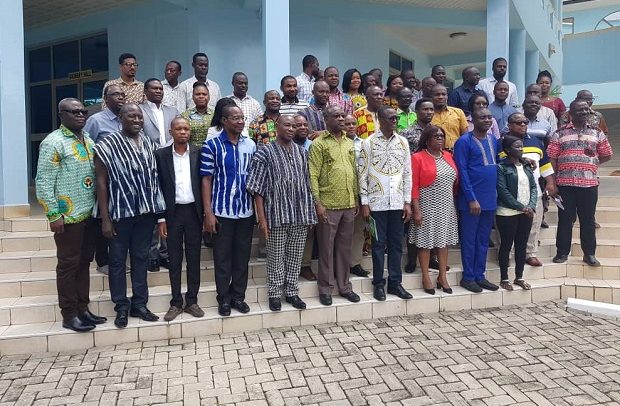 Some of the participants and officials in a group photograph

The Ghana Revenue Authority (GRA) says it is developing an e-payment platform that will enable taxpayers in the informal sector to pay their taxes via mobile money.

Commissioner General of GRA, Emmanuel Kofi Nti, disclosed this over the weekend in Koforidua at the opening of a two-day workshop sponsored by his outfit for members of the Private Newspaper Publishers Association of Ghana (PRINPAG) on the theme: “Brining the informal sector into the tax net – the role of the media”.

In April this year, he said the GRA launched its prosecution policy to alert tax defaulters that the GRA did not only bark but could also ‘bite hard’.

Mr. Nti added that President Akufo-Addo’s vision of a Ghana beyond aid would fail to materialise if citizens continued to evade the payment of taxes.

He challenged members of PRINPAG to honour their tax obligations in order to have the moral fortitude to be able to report on tax issues.

“Beginning Tuesday, I expect you to rush to the MTOs or STOs to settle your outstanding and current liabilities to the full …” he appealed.

In an address, Eastern Regional Minister Eric Kwakye Darfour said the 80 per cent of the Ghanaian workforce who were in the informal sector had a great potential for necessary domestic revenue mobilisation and reducing the huge budget deficit.

“Studies have established that the factors that make the informal sector hard to tax were very high in Ghana as a result of the predominance of cash transactions, poor record keeping, high illiteracy rate, little or no barriers to entry, lack of laid-down procedures, ignorance of tax laws and the peripatetic nature of the informal  sector in Ghana,” he stated, adding that the effective  and efficient imposition of income tax on the informal sector held the great prospect of closing the yawning  gap in domestic revenue generation.

Andrew Edwin Arthur, President of PRINPAG, touched on the need for media training institutions to incorporate specialised reporting in their curricula so student journalists could do better reports on the varied sectors of the economy including agriculture, banking, the road sector and employment, just to mention a few.

“One  other factor that affects revenue mobilisation  and which discourages people from volunteering information that could lead to the arrest of tax evaders is the issue of the confidentiality and the protection of whistleblowers, which is sometimes compromised, thereby exposing whistleblowers to the dangers of attacks and insults,” he stressed.

Furthermore, the PRINPAG president complained that the perceived misapplication and mismanagement of public revenue demoralises taxpayers to honour tax obligations, particularly due to the flamboyant lifestyles of some politicians.