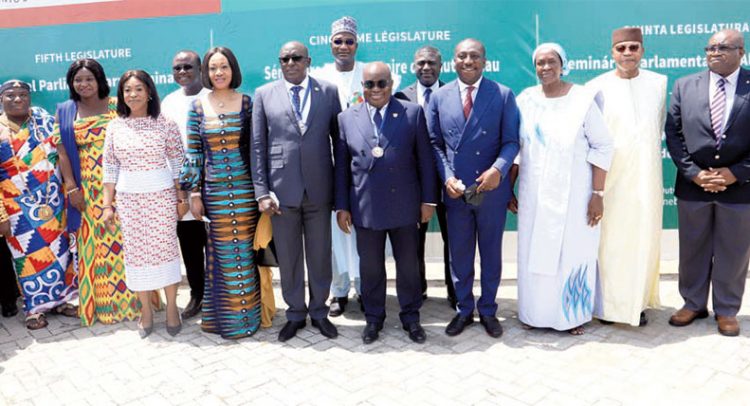 President Akufo-Addo (5th right) with leadership of the ECOWAS Parliament after the opening ceremony at Winneba.

President Akufo-Addo has narrated the tortuous ordeal he went through when he lost two presidential elections.

Nana Akufo-Addo in his attempt to become President of Ghana first narrowly lost to Prof. John Evans Atta Mills in 2008 when he was leading the incumbent party and again lost to Prof. Mills’ Vice, John Mahama, albeit controversially in 2012.

He was however lucky for the third time when he trashed Mr. Mahama in 2016 and repeated the dose in 2020.

For the President, it was but a painful ordeal he had to go through when he lost the two elections and said he had to endure in the larger interest of the country.

The President shared his election story when he addressed high level parliamentary seminar of the ECOWAS Parliament in Winneba yesterday. 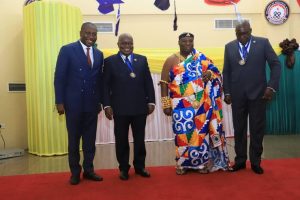 The seminar, which was held under the theme: ‘Two decades of democratic elections in ECOWAS member states: Achievements, challenges and the way forward,’ was held in Winneba through the instrumentality of one of their members, Alexander Kwamena Afenyo Markin, who is the MP for the area (Effutu).

“It is painful enough to lose an election. I can testify to that,” President Akufo-Addo said, adding “there will always be winners and losers in an election.”

That notwithstanding, he noted that “the pain should not come with a suspicion of having been cheated.”

Instead, he insisted that “the winner should be warmly congratulated and support extended to enable our many problems to be tackled.”

The President stressed the need for all stakeholders in the election process to work to ensure that there are no lingering questions about the legitimacy of an election.

That, he said, was because “in the last 20 years, the world has come to acknowledge that elections in the ECOWAS community have been largely free, fair, and credible” with their outcomes generally being acclaimed and accepted.

The President thus noted that “it is vital we maintain this reputation and do not allow any manipulation of the electoral systems to achieve favourable outcomes.”

“The protection of the sanctity of the ballot box carries with it the subversion of good governance,” he said, whilst insisting that “good governance should and must be imperatively exclude political maneuvers to maintain power beyond constitutional requirements.”

“Let us all be aware that beyond that the marriage between the elected and the electorate becomes forced, the environment becomes toxic and the mandate becomes precarious,” he emphasised.

It is for this reason he said the Authority of Heads of State and Government of the ECOWAS, which he chairs, has asked the commission to take steps towards an urgent review of the ECOWAS protocol on democracy and good governance to take account of contemporary developments.

He has since associated himself with the call on members of the ECOWAS Parliament to contribute to this process of review.

‘Scoring Is In My DNA’

Back To The Airwaves