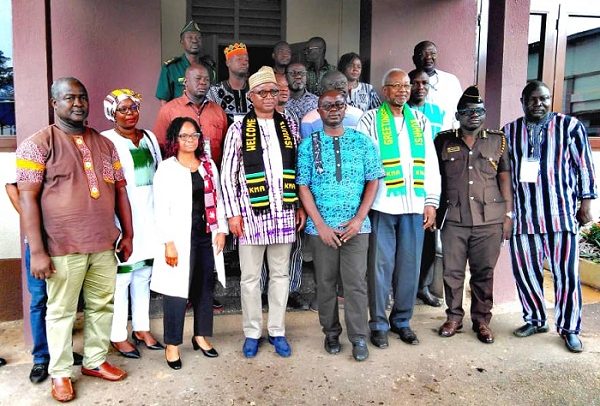 The Ouagadougou team in a group photograph with Osei Assibey
Antwi

Officials of the Kumasi Metropolitan Assembly (KMA) and their counterparts from Ouagadougou in neighbouring Burkina Faso have discussed how to tackle security issues in the two cities.

The meeting‒ which took place at premises of the KMA at Adum, Kumasi, on Saturday morning‒ also saw officials of the two cities talking about other key issues such as trade, tourism, sports and agriculture.

The Burkina Faso team comprised a 23-man delegation, led by the Mayor of Ouagadougou, Roland Pierre Beouinde, and some senior administrative staff.

Kumasi Mayor Osei Assibey Antwi attended the meeting with selected senior staff of the KMA together with other top security officials in the Ashanti Region, especially from the Ghana Police Service (GPS).

In his welcome, Mr. Assibey Antwi said, “We are one people with a common destiny. It is therefore exciting to see our brethren confer with the KMA on a number of issues of mutual benefit for the well-being of the people.”

He described the meeting as timely and beneficial for the two counties, indicating that the meeting would enable the two cities to plan together to be on top of security issues.

Mr. Assibey Antwi stressed the need for Kumasi and Ouagadougou to expand in other key areas such as agriculture, tourism, sports, trade, adding that “the current trade volume between the two cities was huge.”

He particularly made mention of trade in meat, vegetables and locally-made sandals as some of the areas that Ouagadougou and Kumasi were making great progress and called for its sustainability and expansion.

The mayor also used the occasion to highlight on the measures being undertaken by his administration to help restore Kumasi’s lost Garden City status, noting that thousands of trees have been planted so far.

He stated that it was important that the two countries intensified their trading ties and also seek new areas that would enable them to create jobs for their people towards wealth creation.