‘Let’s Adopt A Mindset That Unites Us’ 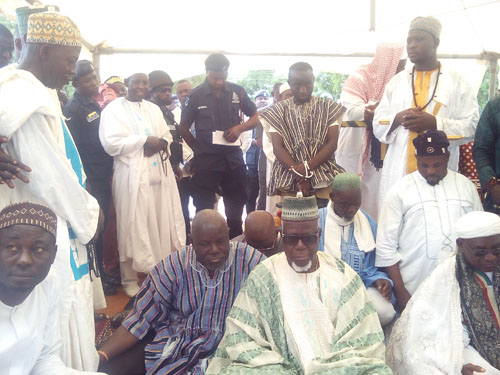 Outgoing Upper East Regional Minister, Rockson Bukari, has reiterated his long-standing view that the people of the region need to adopt a new mindset that unites them for the sole purpose of development irrespective of individual, tribal or political party interest.

In his view, this is a sure way of ensuring that the various districts and communities in the region get their share of development from central government and also mobilize local resources to develop themselves.

Rockson Bukari was speaking at the NAFAC Park in Bolgatanga where hundreds of Muslims gathered to observe a congregational prayer to mark the Eid-ul-Adha.

The day is set aside and prayers are made in remembrance of the total submission and obedience of Prophet Ibrahim and his acceptance to sacrifice his son Ishmael to Allah.

As Muslims go through the day, they are expected to reflect on the significance of Prophet Ibrahim’s submission and obedience to the ways of Allah.

On this, the minister urged Muslims in the region to practise Islamic teachings on unity, cleanliness and tolerance among themselves and extend same to other community members who are not Muslims.

“These lessons are good for our development as individuals and groups. Let us see ourselves as one people in this region. Let us spread the blessings around,” he stated.

He commended the government for the introduction of the Zongo Development Fund, saying “it has come to address the social amenity needs of Zongo communities where such amenities and infrastructure are lacking”.

According to him, the needs assessment and planning of some Zongo communities have been completed and soon actual implementation of the various projects will start. He called on Zongo leaders and opinion leaders to support the work of the Fund for a successful implementation.

The Deputy Regional Chief Imam, Mallam Tahiru Sa-eed, urged Muslims to emulate ways and live according to the advice of the Holy Prophet Mohammed (PBH).

In his view, getting to Paradise is the desire of every true Muslim and urged Muslims to follow the teachings of Prophet Mohammed in their daily lives to attract the grace of Allah and be saved after death.

He advised those who are well to do in society to share their food and other resources to enable the poor to also enjoy on this day.