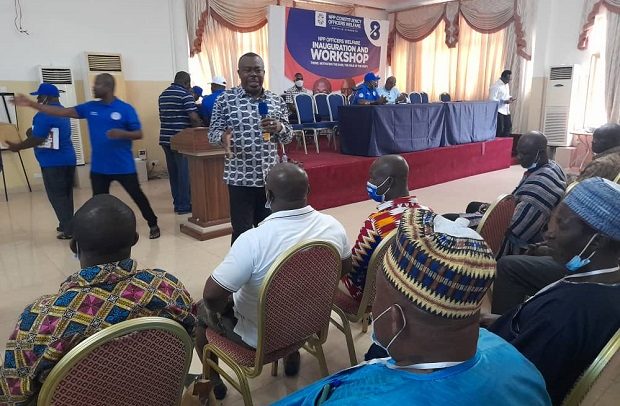 Stephen Asamoah Boateng, Director General of the State Interests and Governance Authority (SIGA), has urged the 275 Constituency Chairpersons of the ruling New Patriotic Party to build a united front for the party to retain power in the 2024 general election.

Mr. Asamoah Boateng, aka Asabee, during an interaction at the inauguration NPP Constituency Officers’ Welfare Fund held at Koforidua in the Eastern Region urged the party’s chairpersons to rally behind the government to implement its policies successfully.

He disclosed to them that he would contest to lead the party as its National Chairman and when successful, he would help to make the NPP the party of choice for many Ghanaians.

He said that he would come up with strategies to energise the grassroots and make a machinery to break the eight-year cycle which has always changed ruling parties since 1992.

Asabee said he would not be an armchair executive and would always motivate the party’s base as well as bridge the gap between the national office and the constituencies.

He said it is only the NPP that can steer the nation on the path of economic prosperity for the benefit and well-being of the average Ghanaian.

“I’m appealing to you all to support my candidature when I formally file to contest. I will be there for you, I am a grassroots person. I know the party inside-out. I have been a Minister of State, Member of Parliament and held other party positions so I believe I have what it takes to know and feel the pulse of our members and well-wishers to help bring victory to the party,” he said.

Why Is Kennedy Agyapong (Hon) Always Getting Roasted For Expressing His Candid Opinion?