Let’s Give Him A Hand – Mahama On Course To End The Deluge Of Crime! 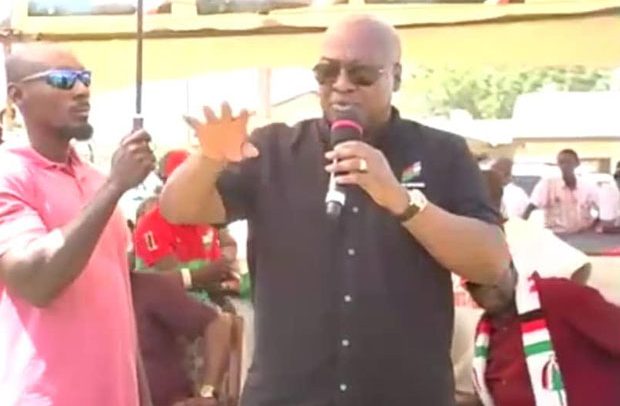 The spate of monstrous crimes, such as armed robberies, kidnappings, and mindless murders during Mahama’s administration, in fact, prompted the then IGP in 2015 to inaugurate a seven-member committee, codenamed – Cold Case; to investigate the rampant armed robberies and murder cases, locate perpetrators and put forward recommendations (See: Police inaugurates special unit to investigate murder cases – MyJoyOnline, 30/01/2015).

Given the deluge of heinous crimes under his watch, the thoughtful observers cannot be faulted for upbraiding former President Mahama on his bizarre comment on the regrettable murder of the two gallant police officers, that Ghanaians do not feel safe under the current Akufo-Addo led administration.

We would, therefore, like to extend our heartfelt condolences to the Ghana Police Service and the bereaved families.

The fact indeed remains that vicious and sanguineous crimes have unfortunately been a societal problem from time immemorial.

So it is quite unfortunate for no less a person than a former president of the country to resort to petty politicking in this moment of sorrow.

You may take my word for it, dearest reader; this is not a desperate attempt to engage in any extraneous or pathetic political equalisation, far from it.

But for the sake of balanced annotation and to situate the topic under discussion in the right perspective, it is somewhat relevant to delineate the facts and figures of Ghana’s crime rate over the last few years.

It is, indeed, true that the Ghana Police Service, whose responsibility is to protect lives and property, have had so many victims in the revoltingly ugly and bloody crimes in the country over the years.

Take, for example, according to the findings of a comprehensive meta-analysis conducted by some observers, the number of officers that have been regrettably killed in their line of duty from 2013 to 2018 is 48 in total.

The all-important question then is: what pragmatic steps and measures did the administration at the time put in place to arrest the troubling situation?

Certainly, it goes without saying that the Ghana Police Service is seriously under-resourced.

Suffice it to stress that the successive governments have woefully failed to adequately equip such an important law enforcement body.

Disappointingly, however, the same people who phlegmatically slept on their job and blatantly failed to resource our security forces whilst in power for eight years now have the brashness to hop from one radio/television station to another, nagging, shrieking and grouching over the serious national disasters such as the recent vicious murder of our gallant police officers without offering any operable solutions.

How could the supposedly responsible opposition persistently and unblushingly call press conferences with the view to inciting the public against the incumbent government over a long-standing societal menace they wilfully failed to address whilst in power?

Considering the weird posturing of some individuals in relation to the recent ‘upsurge’ in crime, why wouldn’t some of us acquiesce with former President Rawlings’s for suggesting a probable conspiratorial plot to undermine the country’s security and the incumbent NPP government?

And why must we blame the skeptics for insisting that perhaps, more than anything else, it is a scheming guile to make the incumbent NPP government look bad in the eyes of the voting public?

After all, the critics may have well hit the nail on the head for smelling the evil hands of the faceless partisan creatures in the recent attacks on innocent citizens and denizens.

Although the heinous and other squeamishly ugly crimes including armed robberies, kidnappings and murders have been the nation’s painful headache over a long period of time, the successive governments have regrettably failed to tackle the menace head-on.

We should, however, take solace in the incumbent NPP government’s apparent commitment in the fight against crime and the subsequent announcement to resource the Ghana Police Service adequately.

Of course, the amount involved may not address all the Ghana Police Service’s cyclopean problems. But at least the NPP government has shown enough commitment to equipping the security forces.

Indeed, there are signs of seriousness on the part of the incumbent government to address the situation head-on.

In sum, whatever the case, the opposition NDC operatives cannot and must not attempt to exonerate themselves from any blame in respect of the recent mindless attacks on innocent citizens and denizens.