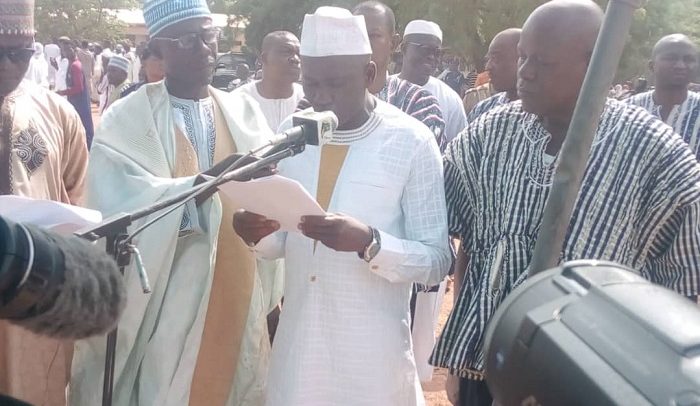 As Muslims in the Bolgatanga Municipality joined other Muslims around the world to mark Eid-Fitr, the Deputy Upper East Regional Minister, Frank Fuseini Adongo has called on the Muslim Community to help spread the need to sustain the peace and tolerance in the region.

He also called on all residents to be vigilant and should not hesitate to report any suspicious character found loitering or wondering about in their communities, saying, it is the responsibility of every Muslim and residents of the region to help protect the peace and stand against crime against humanity.

The Deputy Regional Minister was addressing Muslims to mark the end of the month of Ramadan. This year, hundreds of Muslims from all sections of the Bolgatanga Municipality converged at the NAFAC Park in the heart of the town to observe an open air prayer. They thanked Allah for a successful Ramadan and prayed for a good year.

The Deputy Upper East Regional Minister, Frank Fuseini urged the Police to also act swiftly when such reports are made to them, so as to encourage more people to report suspicious persons they come across in their communities.

The Upper East Regional Chief Imam, Sheikh Adams Yussif advised Muslim youth never to allow themselves to be used against people of other religions, saying Islam embraces and tolerates people of other faiths.

According to him, it is only in a peaceful atmosphere that people including Muslims can freely worship their maker, hence every Muslim should make it a duty to protect the peace in their communities at all time.

Shiekh Yussif believes that if all Muslims continue with their good deeds beyond the Ramadan period, it will put them in a bright light for emulation by others, thereby making their communities better.