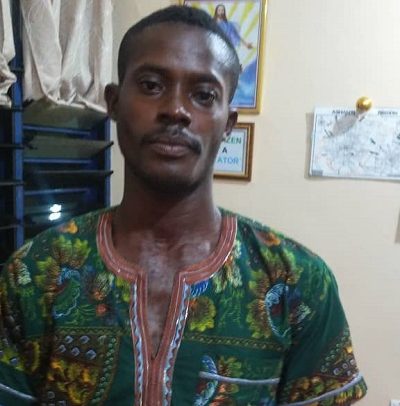 Police in the Ashanti Region have arrested the prime suspect in the gruesome murder of Portia Agyeiwaa Kodie, a former journalist with the Dess FM at Asante Bekwai.

Philip Akumaning, 36, alias Atta Panin, who allegedly murdered his long-time girlfriend over a threat of separation, was apprehended after barely four months of intensive search for him.

He said the suspect and the deceased were in an amorous relationship and lived at Kasoa in the Central Region until the latter was employed at Dess FM early this year.

Subsequently they relocated to Nyameduase, a suburb of Asante Bekwai, where they co-habited.

On April 15, 2018 at about 8:30 pm, a misunderstanding ensued between them when the lady threatened to end her six-year relationship with the suspect.

The police boss said the suspect allegedly became furious with the girlfriend over the threat and attacked her with a double-edged knife, inflicting multiple wounds in the chest, thigh and left arm, leading to her death.

He thereafter fled to Assin Fosu in the Central Region, his hometown and later moved to the Southern Command at Teshie in the Greater Accra Region to seek refuge.

On Friday, August 24, 2018, the police, acting on intelligence with the support of the military, arrested Philip Akumaning at Pentransa in the Asante Akyem area where he attended a funeral.

On Sunday, he led the police to his Assin-Fosu base to retrieve the knife he allegedly used in committing the heinous act, which may be used as an exhibit in his prosecution.

The suspect has since been remanded into custody to reappear at a later date by the Asante Bekwai Magistrate Court.