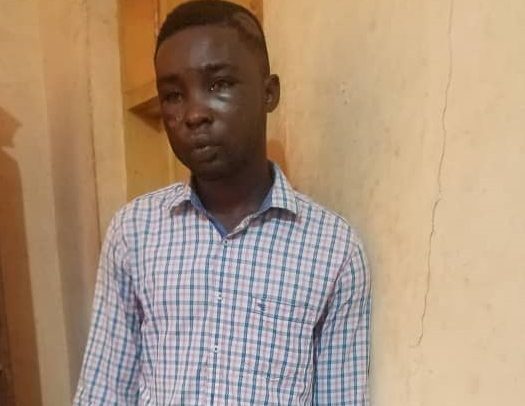 A mason apprentice, Padmore Nkansah has been slapped with a 34-year-jailed term for pulling guns on his victims and stealing their watches, mobile phones and cash in two robbery expeditions at Dominase junction, on the Kumasi-Anwiankwanta highway.

The convict, a resident of Dominase in the Bekwai Municipal district of the Ashanti Region, and an accomplice, Amarta (currently on the run) threatened their victims with a locally manufactured pistol and knife during the robberies on May 28, 2019.

He admitted the offences of robbery, possession of firearm and ammunitions without lawful authority and conspiracy to commit robbery at Bekwai Circuit Court presided over by Fredrick Nawura.

The third accused person, Prince Amoah who stands accused of abetment of crime – to wit: robbery, transfer of firearm with lawful authority, and robbery, has been remanded in prison custody after pleading not guilty to the charges.

Prosecutor, Detective Inspector Stephen Ofori informed the court that Prince Amoah, an electrician, was involved in one of the robberies conducted on the dawn of May 28 this year.

According to him, the accused person and Nkansah, and accomplice Amarta, who is at large, on the said date, attacked one Moro Ayamba around 3:30 am, whilst the complainant was looking for a vehicle to board to Prestia at Dominase junction.

He narrated that the complainant, Ayamba was returning to his base after attending a funeral of his late sister-in-law at Dominase when the gang attacked.

They managed to dispossess him of his Techno mobile phone valued GH¢150, a wrist watch valued GH¢30, and GH¢350 sum on him, prosecution stated.

Inspector Ofori said the complainant, on seeing his attackers were heading towards Dominase township, maneuvered his way through the bush and informed his Muslim brothers, who were praying at a mosque about his ordeal.

Lack eluded two of the gangsters when they came asking for a place to buy cigarette, but Amarta managed to escaped as Nkansah was arrested.

Upon searching him, revealed the locally manufactured pistol, and the complainant’s mobile phone, the prosecutor indicated and added that Nkansah mentioned Prince Amoah as the one who gave him the pistol.

He led police to arrest Amoah at his home, said prosecution, pointing out that Amoah was later identified by another complainant of being part of the gang that attacked him on the same day at the same place.