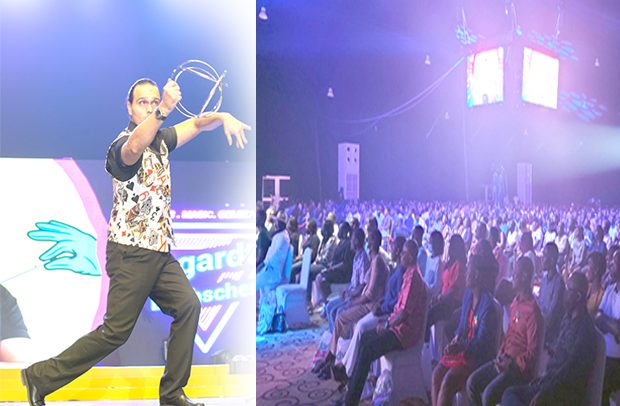 Regardts Laubscher, The crowd at the event

It was a night of danceable tunes, laughter and pure magic from talented performers in an all-star lineup. That’s exactly what the 5th edition of MMC Live gave the audience, living up to the expectations and satisfaction of Ghanaians.

An ecstatic crowd made up of Ghanaian music, magic and comedy fans from all walks of life thronged the venue to partake in the event. It was an all-night affair which provided non-stop entertainment.

The event organised by Global Media Alliance (GMA), kicked off with a colourful samba dance by Samba Ghana and a mix of live band music from the Ark Band.

Young female musician, Abetimi, and Kweku Wina, the King of YFM Rapture Season Two, took over the stage and thrilled the audience at the event with their songs.

With the crowd enjoying their slice of pizza and drinks and some ice cream, Ghana’s number one hype man Kojo Manuel and finest female DJ MzOrstin – both of YFM, turned up the stage on the night.

The entry of comedian Clemento Suarez, the host of the night, riding a bike from the audience to the stage took patrons by surprise.

The performance of Adina made highlights, as a section of the audience waved their hands to show appreciation to her stage performance.

Immediately after her performance, young comedian Parrot Mouth laid the grounds for the performance of Nigeria’s Kenny Blaq, who gave a good account of himself on stage. He had a very strong stage presence.

Regardts Laubscher, the magician from South Africa, delivered some incredible magic that got people stunned.

The well-attended event also witnessed energetic live performances from KiDi, who performed most of hit songs, without breaks, to entertain fans.

KiDi, who did what he knows best, gave away mind-blowing performance that left the audience wanting more. His performance was a blast; the songs he performed were all that was needed to make a statement about the quality of his songs.

‘I’m Struggling Financially As A Celebrity’