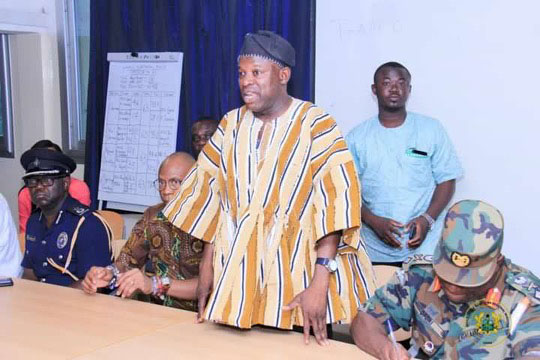 Salifu Saeed speaking at the meeting

Northern Regional Minister Salifu Saeed has appealed to doctors, nurses and midwives of the Tamale Teaching Hospital (TTH) to return to work to save lives at the facility.

The minister assured the health workers that all necessary conditions, including a police post at the hospital, will be made available to enable them to go on with their normal duties at the hospital.

His appeal follows a strike action by the staff of the hospital after the Chief Executive Officer (CEO) of TTH, Dr. Kolbilla David, was attacked by Kandahar Boys.

The sit­-down action by the health staff to register their displeasure over the attack of Dr. Kolbilla has left patients of the facility stranded.

The nurses and midwives of the hospital revealed that they will consider returning to work if the police post is established at the hospital, perpetrators of the lawlessness are arrested and an unqualified apology is rendered to the CEO.

DAILY GUIDE gathered that new patients who went to the hospital on Wednesday morning were sent back home due to the strike by the health workers.

According to the nurses and midwives, several attacks had been made on the CEO’s life, indicating that past CEOs like Dr. Anthony Nsiah-Asare, Dr. Kenneth Sagoe, Dr. Prosper Akanbong and now Dr. Kolbilla have all suffered this act of lawlessness from groups within Tamale without any repercussions.

They stated that they do not feel safe working in the hospital in view of what happened, adding that if their CEO who is the landlord of the facility could be manhandled in such manner, then the rest of the workers must take serious cover before these lawless persons turn on them.

“We, as nurse and midwives of the hospital, condemn these acts of lawlessness that has bedevilled the institution over the past years. Many nurses, midwives and other staff have faced brutalities over the years in the hospital,” they said.

But Salifu Saeed, in an emergency meeting with the Northern Regional Security Council (REGSEC), hospital authorities and the striking health workers, assured them of finding a lasting solution to the problem.

The workers, however, expressed their apprehension, saying they were unperturbed by the promises of the regional minister.

The leadership, therefore, asked REGSEC to put a paper agreement to their conditions and assure them of fulfilling their demands.

As at the time of filing this report, the meeting with REGSEC, led by Salifu Saeed, with the hospitals authorities and the striking health workers reached a deadlock.