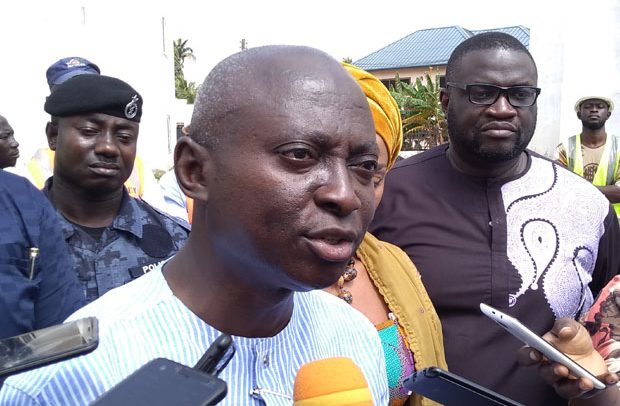 Minister addressing the press at the end of the tour

The Minister of Works and Housing, Samuel Atta Akyea has expressed sadness over the prolonged litigation that has led to a halt in completion of a seven block, 65 apartments project at Gardens near SSNIT flats in Adenta for the past four years.

The project which is being financed by the State Housing Company (SHC) has been halted as a result of an injunction placed by a commercial court pending outcomes of a $2. 5 million case that involved State Housing Company and a third party contractor as defendants and a lender as a plaintiff.

This has led to the project which is about 80 per cent complete to be exposed to harsh weather conditions while some buildings which have been completed remained unoccupied.

The minister expressed his dissatisfaction at the end of his visit to four housing project sites being managed by SHC in North Kaneshie and Adenta within the Greater Accra region.

The projects were part of rigorous housing development projects that were started in 2017 by SHC to retool and improve the viability of the company.

He advocated that mechanisms needed to be put in place to ensure that litigations are not used as weapons to stall infrastructural development which overly delay execution of projects at a humongous cost.

He therefore reiterated the commitment of the ministry to collaborate with management of SHC to ensure that at least the injunction gets lifted to allow works to continue while the matter is being settled in court.

In addressing issues of affordability with regard to acquisition of homes, Mr Akyea identified the implementation of a credible mortgage system that could leverage on pension funds as a game changer to solving the problems of affordability in the housing sector of the country.

He indicated that most of the government’s housing deliveries are meant for the low and middle income earners who may not necessarily raise enough capital in their lifetime to acquire such properties.

He therefore advised Ghanaians to embrace the concept of mortgaging that would allow citizens own properties payable within a period of 20 to 25 years.

“We have even delivered papers to the Ministry of Finance in relation to creating a mortgage arrangement using pension and other reserves of the nation” he said.

The Managing Director of SHC,  Kwabena Appiah for his part said that the company was on a paradigm shift to becoming self sufficient by acquiring its own building technologies as well as carrying out its own projects without outsourcing.

Such a process he noted was necessary to reduce dependence on government for financial assistance in carrying out its mandate.

“State housing in the last two years has not borrowed a dollar from any bank and everything that we are doing is as a result of our own internally generated funds” he said.

MPs Get Support From Parliament At Primaries