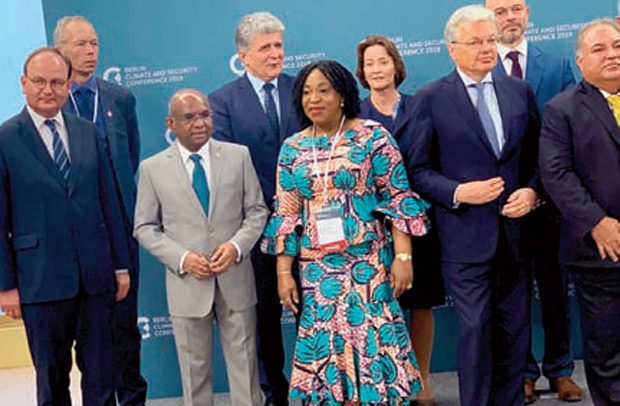 The Minister of Foreign Affairs and Regional Integration, Shirley Ayorkor Botchwey, has called on the global community to effectively collaborate in tackling climate change.

She made the call while delivering a keynote address at the 9th edition of the Climate and Security Conference organised by the German Government and the Potsdam Institute for Climate Impact Research (PIK) in Berlin, Germany.

According to her, the socio-economic impact of climate change on the global community is taking a devastating toll on health, agriculture, migration and the general wellbeing of societies and concerted action was urgently required.

She stated that “the challenges of climate change have no borders and such require collaborative efforts from all countries across the globe.”

Also at the Berlin Climate and Security Conference with the Foreign Minister was Ghana’s Ambassador to Germany, Georgina Blay.

Ms Ayorkor Botchwey explained that in Ghana, for instance, changes in rainfall pattern have led to water scarcity, drought and desertification and food insecurity in some parts of the country.

These adverse climatic trends, she said, have affected the livelihood of people, including availability of grazing lands for cattle, which have induced movement of pastoralists to farming communities in search of pasture for their cattle.

In the process, she explained, crops in farming communities have been destroyed by cattle and have resulted in intermittent violent clashes and reprisals between settler farmers and nomadic herdsmen, leading to deaths and internal displacement of people.

Such situations continue to create tension in some parts of Ghana.

Climate change is no doubt one of the global crises of our time and poses a threat to our very existence, world peace and security, she disclosed, stressing that.

According to the Minister, the effects of extreme weather conditions, including floods, have also wreaked untold damage to property and livelihoods, as well as the loss of valuable human life.

She told the gathering some communities have had to endure large numbers of young farmers moving to the southern part of Ghana for better economic conditions.

It’s important to note that economic, human and security risks could worsen in the coming decades due to the extreme weather effects on vulnerable communities, she added.

“A case in point is the rising tension in the Lake Chad basin and in the horn of Africa, where the scarcity of water and harsh weather conditions have had profound adverse effect on communities.”

The minister highlighted the possible adverse impacts that climate change could have on investment opportunities across the world, saying emphatically that “it’s worth noting that these tensions discourage investors, who would not want to invest capital in places that are considered high risk areas.”

She explained that “investors are in for profit and so under such conditions would divert to stable regions where they would maximize returns on their investments. The absence of sustainable investments invariably affects the socio-economic lives of the people.”

She pointed out efforts being made by the Ghanaian government headed by President Akufo-Addo to address climate change.

“I am glad to inform you that the Government of Ghana has demonstrated strong political will in dealing with the issue of climate change, in building resilience and by raising the ambition of its climate change agenda as evidenced by Ghana’s Nationally Determined Contribution (NDC) Implementation and Investment Plan under the Paris Agreement, the President’s Coordinated Programme of Economic and Social Development Policies 2017–2024 (CPESDP) and the Ghana Sustainable Development Goals Indicator Baseline Report, led by the President of the Republic of Ghana, who is a Co-Chair of  the Eminent Group on Sustainable Development Goals.”

“Furthermore, as part of efforts to diversify energy sources, the Government of Ghana recently announced a major policy boost for a nationwide use of renewable energy. The seat of Ghana’s Presidency, Jubilee House, will soon be powered by solar energy. The Government of Ghana has also placed a ban on illegal mining, the phenomenon we call ‘galamsey,’ which is destroying the country’s water bodies, vegetation and forests.”