Muslims Urged To Participate In Census 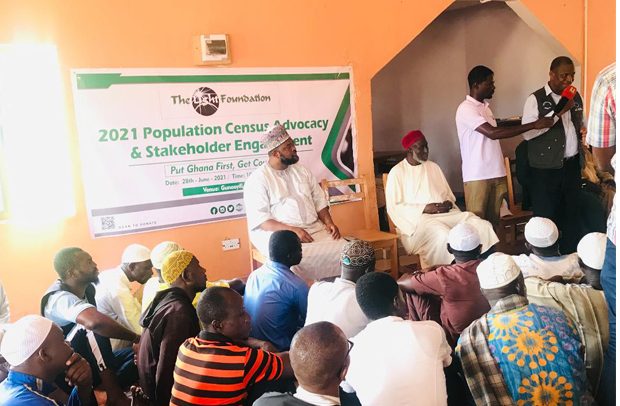 The Chief Executive Officer of the Light Foundation, Sheikh Ali Napari, has urged Muslims in the Northern Region to fully participate in the 2021 population and housing census.

The Light Foundation has embarked on a sensitization tour to Muslim communities in the Northern region to educate them on the importance of the 2021 population and housing census.

The Light Foundation CEO, addressing Muslims at Gunaayili, a suburb of Tamale, said Muslim leadership rejected the previous census figures attributed to the Muslim community because they failed to avail themselves to be counted.

“After we did some research, we realised that Muslims are part of the problem because they were not making themselves available to be counted so this time around, we are trying to sensitise Muslim communities so that they will know the importance of the census exercise to help government to plan as far as development is concerned,” he said.

Sheikh Napari entreated Muslims to cooperate with census personnel who visit them and give out accurate information.

“We are convinced that if Muslims come out to show their real numbers, government will help us and we will also help government for the betterment and development of the country.”

The Northern Regional Statistician, George Agbenyo, at the sensitisation ceremony, appealed to the Muslim community to be ambassadors for the importance of the census exercise.

“Let’s us all leave here as ambassadors and let’s educate our people that, this census is for our benefit and therefore, they should all participate.”

He thanked officials of the Light Foundation for the continuous support to educate the Muslim communities in the Northern region and called on other institutions and NGOs, to help the Ghana Statistical Service for a successful census.

About 5,392 census field personnel have been assigned as enumerators and supervisors in the Northern region.

'Remunerative Income Is The Surest Way To A Sustainable Cocoa Industry'