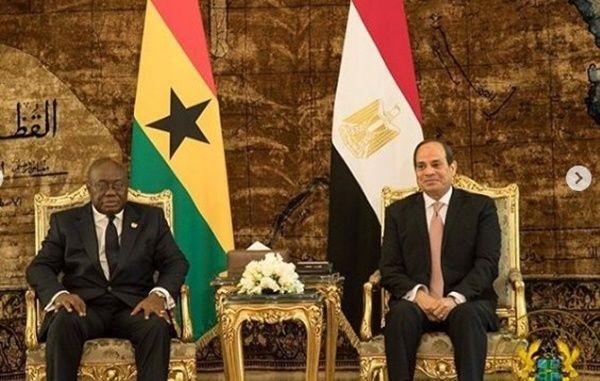 The President for the Republic of Ghana Nana Akufo-Addo is currently in Egypt to watch Ghana’s first AFCON game against Benin later today.

Nana Akufo-Addo made a promise when he hosted the players and officials of the team at the Presidency before their departure to Dubai for the pre-tournament camping.

He said should Ghana qualify to the final, he would again be in Egypt to motivate the Black Stars to win the AFCON trophy which has eluded the nation for the past 37 years.The President in the early hours of Tuesday held bilateral discussions with the President of the Arab Republic of Egypt, His Excellency Abdel Fattah el-Sisi, aimed at strengthening the ties of co-operation that exists between the two countries.

Nana Akufo-Addo is expected to be in Ismailia to watch the Black Stars take on the Squirrels of Benin at the Ismailia Sports Stadium later today.

Kick off is at 8pm

Rewriting The News On Africa

Three Grabbed For Abduction And Robbery