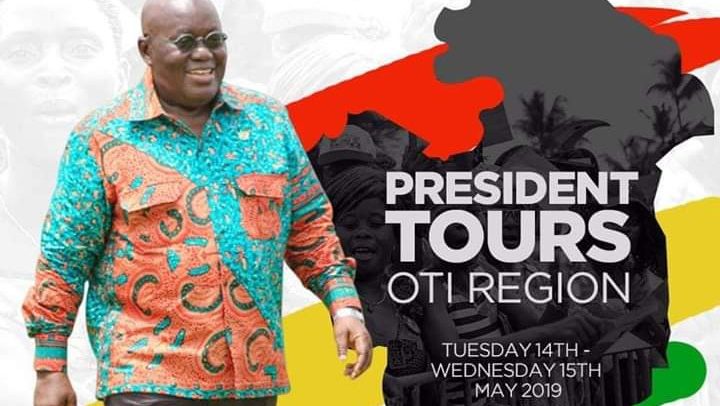 The tour, which will begin at Jasikan in the Oti Region this morning, is the second phase of the president’s working visit of the newly created regions in the country.

In April, this year, the president visited the Ahafo, Western North and Bono East regions.

On Tuesday, May 14, 2019, President Akufo-Addo will cut the sod for the construction of the Jasikan-Dodi Pepesu road under the Sinohydro deal after attending a durbar of the chiefs and people of Jasikan, Kadjebi and Biakoye in the Buem Constituency.

The president will also meet the chiefs and people from Nkwanta North and South at a durbar at Nkwanta.

On Wednesday, May 15, 2019, he will inspect work on the Nkwanta-Dambai road at Nkwanta.

He will also visit the proposed site for the Regional Coordinating Council at Dambai, the regional capital and attend a durbar of the chiefs and people of Krachi in the Krachi and Nchumuru constituencies.

President Akufo-Addo will move to the North East Region on Thursday, May 16 to attend a durbar of chiefs and people of Nalerigu at Nayiri Naa Bohugu Abdulai Mahami Sheriga’s palace.

He will also inspect a water project and visit the proposed site for the Regional Coordinating Council at Nalerigu in the Nalerigu/Gambaga Constituency.

He will also cut the sod for the construction of the town roads in Bunkpurugu and a durbar with the chiefs and people of Chereponi.

He will, on Friday, May 17, 2019 proceed to the Yagaba Koubori and Walewale constituencies to attend a durbar at Yagaba.

The president will also commission a warehouse and inspect an IWAD 1000 hector irrigation project under the ‘planting for food and jobs’ programme.

The president will climax his tour of the North East Region at Walewale with a durbar of chiefs, after an inspection of a water project.

On Saturday, May 18, 2019, he will pay a courtesy call on the paramount chief of Wasipe and interact with Daboya Smock Weavers to herald the beginning of the president’s tour of the Savanna Region.

He will interact with tutors and students of Sawla SHS and inspect the district hospital at Sawla.

President Akufo-Addo will attend an inter-denominational church service at Damongo on Sunday, followed by a courtesy call on the overlord of the Gonja Traditional Area, Yagbonwura Tumtumba Boresa I.

He will inspect the site for the construction of the Regional Coordinating Council, attend a durbar of the chiefs and people of Yapei at the Yapeiwura’s Palace and inspect the Yapei Water Extension Project in the Yapei Kusawgu Constituency.

The president is scheduled to return to Accra on Sunday, May 19, 2019.