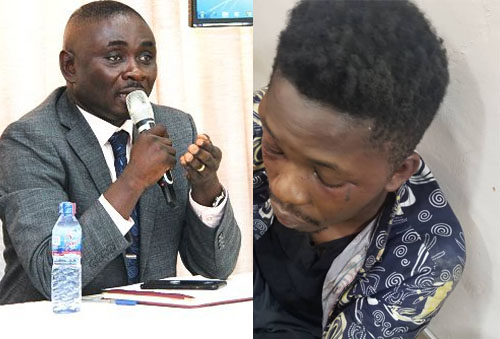 Col. Michael Kwadwo Opoku and Aghaor Sampson the ringleader of the kidnappers

DGN Online is informed that the Director of Operations at National Security, Col. Michael Opoku, led the rescue mission for the two kidnapped Canadian women in Kumasi.

DGN Online is also informed that the ringleader of the Nigerians involved in the kidnapping is Aghaor Sampson who has since been arrested.

In all three Nigerians out of 14 suspected kidnappers of the two Canadian Women are believed to be Nigerians.

The Canadian women have been rescued by an all Ghanaian security operative, DGN Online is informed.

According to information gathered by DGN Online, there was exchange of gun fire between the kidnappers and the Ghanaian security operatives.

Two Nigerians have already been linked to the kidnappings of the three Takoradi girls who are still in captivity.

One of the two kidnappers of the Takoradi girls, have since been jailed for jail break.

According to the Information Minister’s statement, “National Security Operatives in the early hours of Wednesday 12 June, 2019
completed an operation which successfully rescued the two (2) Canadian women recently abducted in the Ashanti Region.”

“Government continues to encourage the media and commentators to be
circumspect in public commentary on security matters in order not to compromise other related operations.”

Citizens and travellers are once again assured that Ghana remains safe, it said.