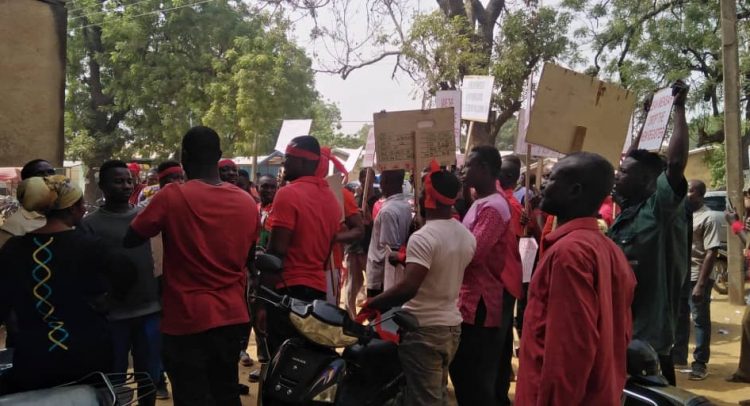 Members of the National Democratic Congress(NDC) led by Regional and Constituency Executives picketed at the offices of the Electoral Commission in the Upper East Region on Wednesday, January 22.

Their action was in line with the demonstrations by the national leadership of the NDC, in protest against the Electoral Commission’s planned compilation of a new Voters’ Register, ahead of this year’s general elections.

The Bolgatanga exercise was joined by some other parties and Civil Society Organizations .

Like their national executives, the NDC Upper East Regional Executives and others who joined the picketing, called on the Electoral Commission to listen to the voice of the masses and rescind its decision on the new register.

They also urged government not to support the Electoral Commission, but rather it should spent the resources for the new register to address some social challenges the country is faced with.

On Tuesday, the National Democratic Congress in the region, urged its members and sympathizers to come out in their numbers to send a clear message to the Electoral Commission and the government.

Even though the numbers were not as big as those recorded in Tamale and Kumasi, the leadership of the NDC in the region believes that their target was achieved and hoped that the Electoral Commission will listen.

Similar exercises, according to the NDC Deputy Regional Communication Director, Gaspard Kapuli, were carried out across the region, where NDC members and their supporters presented petition to officers of the Electoral Commission in the districts.

In the Bolgatanga Municipality the NDC members converged at the NAFAC grounds and matched to the officer of the Electoral Commission. They carried placards with inscriptions such as “We don’t need a new register,” “we need a new president not a new Register.”

In Navrongo, the leader of the Coalition Group, Dr. Selanwiah S. Abdul-Mumin charged all Ghanaians to join the protest against the compilation of the new Voters’ Register and not see it as just a problem for a few people.

“Fellow Inter-Party Coalition patriots, the media and all concern and venerable citizens of our dear nation, the destiny of Ghana lies in our hands and we must be prepared to uphold and defend the holistic prospects of our nation devoid of malice.

To that effect I challenge each and every one of you here to strongly resist this insensitive EC Chairperson who has failed to listen to the voice of the ordinary Ghanaians just to enable her and her superiors reap abnormal benefits to the detriment of the tax payers,” Dr. Abdul-Mumin said.