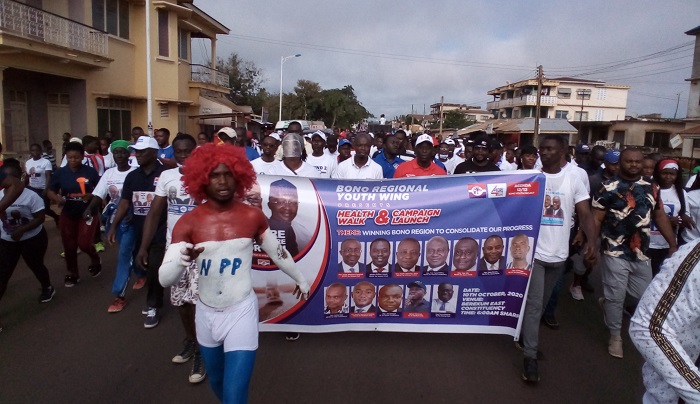 The NPP youth in Bono Region embarking on a health walk

THE YOUTH Wing of the ruling New Patriotic Party (NPP) in the Bono Region over the weekend embarked on a mammoth health walk and launched its campaign for the December 7 general election.

They have vowed to work hard to capture all the 12 seats in the region.

Led by the party’s Regional Chairman Kwame Baffoe (Abronye DC) and supported by the NPP National Youth Organiser, Henry Nana Boakye (Nana B), and other senior members of the party, they thronged the principal streets of Berekum to send home the NPP’s message.

They were ably supported by the Dormaa Central MP and Health Minister Kwaku Agyemang-Manu as well as the Sunyani West MP and Minister of Employment & Labour Relations, Ignatius Baffour-Awuah.

The youth said they were ready to embark on a massive house-to-house campaign to trumpet the achievements of the NPP under President Akufo-Addo in order to retain power and continue with the good policies and programmes of the government.

They displayed the party’s successful programmes and initiatives like the 1D1F, NABCO, installation of trainee teachers & nurses allowances, planting for food & jobs, one district one warehouse, one constituency one ambulance, Free SHS, among others, on placards.

Addressing the crowd, Abronye DC tasked them to campaign on the record of John Dramani Mahama, who he said “dissipated” government coffers for the benefit of family and friends.

He said President Akufo-Addo was working hard to make things better for Ghanaians compared to Mr. Mahama who always brings hardship to the people apart from those around him.

“Go from house to house to campaign. Don’t let us allow Mahama and his NDC in the region to even get between 20 or 30 per cent of votes in the region,” he said.

Taking his turn, Nana B gave statistics on some achievements of the NPP government on job creation, which he said has benefitted many of the youth in the region and the country at large.

He urged the youth to continue to work hard and retain the NPP in power.

NPP Must Have Eagle Eyes On National Security While Campaigning!!