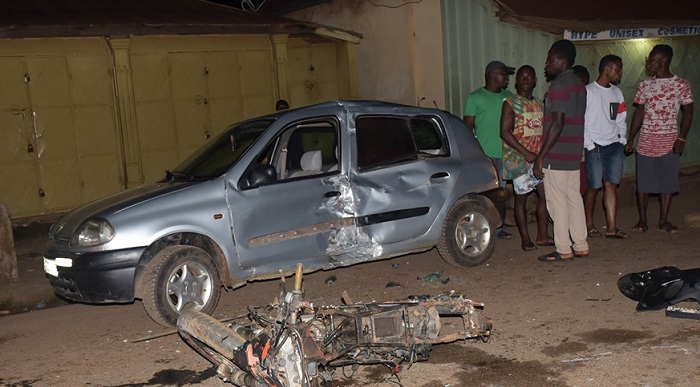 FELIX KOTEY, Lower Manya Krobo Municipal MASLOC Coordinator, who doubles as the Communications Officer of the New Patriotic Party (NPP) in the constituency, nearly lost his life when a motorbike rammed into his Renault Clio Saloon car.

The incident happened at Agormanya near Market Junction in the Lower Manya Krobo Municipality of the Eastern Region on Saturday evening.

According to reports, the Renault Clio Saloon car with registration Number GE 9104 Y was in traffic on the main Kpong-Odumase highway at Agormanya Sunset Junction when the motorbike ran into the driver’s side of the car, leaving him seriously injured.  He is currently receiving treatment at the emergency ward of the Atua Government Hospital.

The rider of the bike did not sustain serious injuries but the other person who sat close to him on the bike is also in critical condition and has been admitted to the St. Martin De Porres Hospital.