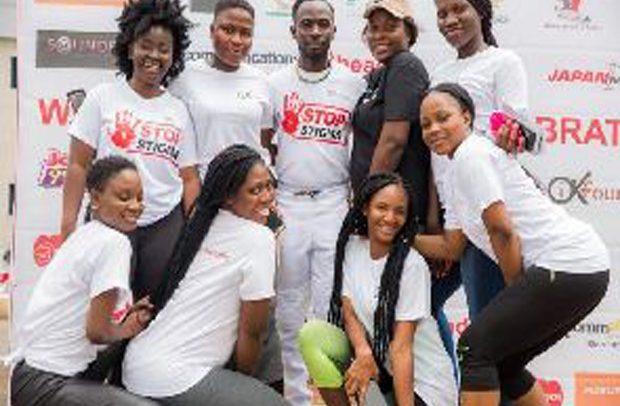 Okyeame Kwame in a pose with some of the participants

Thousands of people benefitted from the hepatitis B free screening which was organised by Okyeame Kwame at the Silver Tower in Airport City, Accra.

The exercise, which formed part of initiatives to mark this year’s World Hepatitis B Day, also comprised an educational campaign to educate the general public and create awareness on hepatitis B infection and to help the fight in kicking hepatitis B out of the country.

The screening exercise was organised by the Okyeame Kwame Foundation (OKF) with support from the MDS Lancet Laboratory and the Ghana Health Service (GHS).

Prior to the screening, there was a health walk and aerobics organised by the OKF which attracted hundreds of Ghanaians from all walks of life.

In a chat with BEATWAVES, Okyeame Kwame disclosed that participants from the hepatitis B free screening received free testing and vaccination.

Describing hepatitis B as potentially life-threatening, Okyeame Kwame said it is a major global health challenge that can cause chronic infection and put people at a high risk of death from cirrhosis and liver cancer.

He expressed excitement over his ability to successfully organise this all-important exercise in many parts of the country, including Tamale, Ho, Accra, among several other places for Ghanaians.

The award-winning artiste also expressed his appreciation to MDS Laboratory and all stakeholders for their unwavering support in the success of the foundation and its projects so far.

He advised the public, particularly the youth, and entreated them to take hepatitis B screening seriously because it is preventable while HIV/AIDS is not.

He made a passionate appeal to the government and other corporate organisations to support the fight against hepatitis B in the country.