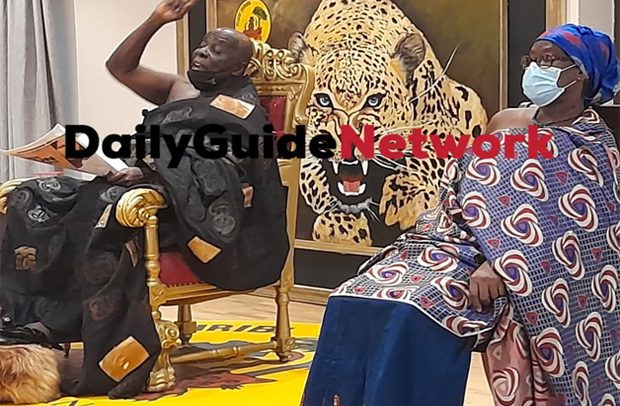 THE Okyenhene, Osagyefuo Amoatia Ofori Panin, is taking steps to ban all ritual activities in shrines in the over 940 communities in the Akyem Abuakwa Traditional Area in the Eastern Region.

He held a meeting with his chiefs at the Ofori Panin Fie in Kyebi in Abuakwa South yesterday, where he summoned a notorious fetish priest called Yaw Sofahu, popularly known as Togbe Shito, to explain why he allowed a woman to invoke curses in his shrine despite banning such rituals.

The Okyenhene said the proliferation of foreign shrines, whose activities were bringing misery to the people, had become alarming and must be checked without further delay.

The Okyenhene who appeared incensed said he “found it extremely necessary to take action concerning the provocative spectre of the establishment of alien shrines by fetish priests with no clear social ties and identity, mainly from the neighbouring countries, directly linked with the violation of Akyem Abuakwa customary observances, ritual murders, fake currency racketeering, and other violent criminal activities.

“It has been observed that over the past decade there has been an unperfected influx of immigrant ritualists guised as traditional priests who have abused the hospitality of Okyeman and engaged in activities that threaten the lives of residents, social order and the health of the national economy.”

He said “it must be stated that although the acquisition of land and landed property is permitted for non-subjects of the Ofori Panin Stool, it is strictly forbidden for migrant traditional rulers and traditional priests to invoke alien rituals and purport to exercise customary authority, which is the sole prerogative of Nananom of Akyem Abuakwa.” 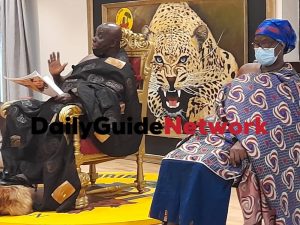 He continued that “for the sake of clarity, alienation of land does not confer jurisdictional authority on the alienee and further the performance of unregulated ritual activities.”

The Okyenhene said that the recent killing of an 11-year-old boy in Kasoa by two teenagers in the Central Region was a national tragedy which should never have been allowed to happen.

He recalled how police are linking the gruesome murder of the boy to a purported television advertisement by a fetish priestess based in Amanase in the Eastern Region that ‘influenced’ the two Kasoa teenagers to commit such heinous crime.

The Okyenhene said he raised similar concern last year, following the arrest of the two fetish priests near Adeiso, who were accused of murdering a biochemist, and ordered the removal of alien shrines from Akyem Abuakwa lands within two weeks.

The two fetish priests — Christian Lawoe Gameli aka Power-One, 36, and Famous Adukonu aka Scorpion, 37, both from Afife in the Volta Region — were operating a shrine called ‘Power 1 Herbal & Spiritual Centre’ located at Adu Kwadwo and Kofi Nyarko villages, near Maame Dede Junction on the Nsawam to Adeiso road.

He said he had warned all chiefs in Akyem Abuakwa not to lease lands to any immigrant traditional priests and their associates, and reiterated that chiefs who defy the order would face immediate destoolment and other related sanctions.

Turning to Togbe Shito who was paraded before the Ofori Panin Fie yesterday, the Okyenhene asked him to produce the woman who was captured in a video at his shrine cursing the President and the Okuapehene or be banished from Akyem Kukurantumi, in the Abuakwa North Municipality.

He said he would not allow anyone to tarnish the image of Okyeman, Okuapeman and even to the extent of invoking curses on the President of the land who is also a native of Akyem.

The controversial fetish priest, two years ago, was arrested for assaulting some beauty pageant contestants who were marched to his shrine over some missing items.

The fetish priest denied knowledge of the video recording, and also denied knowing the woman who got to his shrine to invoke the curses.

The Okyenhene, holding a copy of the DAILY GUIDE newspaper displaying the Kasoa murder case, said he would deal with the fetish priest if he failed to bring the one behind the recordings, as well as the woman captured in the video cursing the President and the Okuapehene.

The Okyenhene told Togbe Shito that he had been setting precedents in the Akyem area after referring to his past bad records, and gave him a stern warning.

“You know very well that on this Akyem land we have banned the invocation of curses, and because you don’t have any decency at your shrine you allow an elderly woman to come to your palace naked to perform rituals and rain curses on the sitting President who is from the Akyem land, the Okuapehene who is my cousin and you are here denying this before me.

“We are all living peacefully with all the tribes, we don’t have any problems with your work, but we will also not allow you to cause trouble on our land.

“You (fetish priests) are settlers on our land, instead of you to live with us in peace, you have resorted to causing trouble, doing money doubling, pushing people to engage in money rituals and killing of innocent souls. We won’t sit down and allow some of you to destroy our image, we will deal with all of you,” the Okyenhene said. 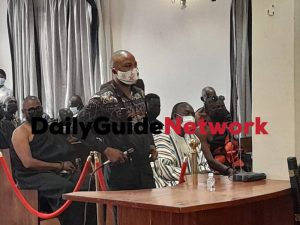