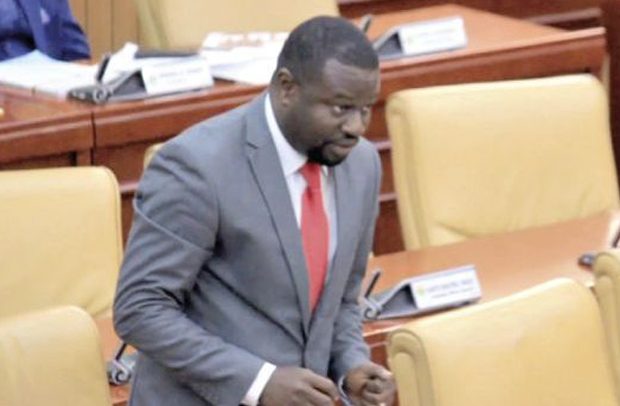 Frank Annoh-Dompreh
THE MAJORITY in Parliament has countered an assertion by the Speaker, Alban Sumana Kingsford Bagbin, that the legislature is broke, accusing him of not exercising patience and engaging in “presumptuous” outburst.

Majority Chief Whip, Frank Annoh-Dompreh, said the outstanding GH¢25 million which forms part of the allocation to Parliament for its goods and services had been released at the time the Speaker was claiming that there was no money to run the business of the House.

“I am talking about GH¢25 million for outstanding goods and services to Parliament. So yesterday, when the Speaker was lamenting, indeed officially the release had been effected, and we were just going through the process. The process had kick-started, and it was just a matter of few hours for it to hit Parliament’s account,” he stated.

On Thursday, Speaker Bagbin accused the Finance Ministry of delay in releasing the needed funds to the House, asserting, “Parliament is currently being run on arrears, and the House should not be treated like one of the ministries, departments and agencies (MDAs).”

“The Speaker is not ready and prepared to be blamed for the inability to get the parliamentary business going on just because we are not getting the necessary funding,” he pinned.

But in a quick response, the Majority Chief Whip said, “The Speaker’s statement was a bit presumptuous, and with the greatest respect, if he had exercised a bit of restraint, I think that he might not have made that comment that Parliament is broke. It creates an image of our country, and it is not too good,” he posited.

“We do not want to have banter with the Speaker, but where we find that things need to be straightened, we would find a diplomatic way of doing that, reaching out so that we have peace for the progress and execution of work of the House,” he intimated.

Mr. Annoh-Dompreh explained that the Majority Leader, Osei Kyei-Mensah-Bonsu, had already communicated with the Clerk to Parliament and the Chief Account Officer for the funds to be released to the House, noting, a little patience from the Speaker would have been better.

“A day before Thursday, I was in touch with the Majority Leader before he left for Kumasi. He gave me a heads up in terms of what communication has gone on for the releases to Parliament, and he tells me, he had appraised the Clerk to Parliament and the Chief Account Officer about it. So they all had foreknowledge about the processes involved, and the fact that the releases had been done.”

However, the pronouncements by the Majority Caucus did not go down well with the Speaker, returning the fire from the Majority, and asserting that he (Bagbin) takes strong exception to such pronouncements, including a similar one from Majority Leader, Osei Kyei-Mensah-Bonsu, on radio.

“It is important that when the Speaker speaks from the chair,the leader of the House – thatis the leader of the Members of Parliament – is not seen to be the one countering what the spokesperson of the arm of government says, and if they want us to give documentary evidence about the funding of the House this year, we will provide them,” Mr. Bagbin stated yesterday.

“So when the Leader of the House had gone on air to say that what I said is not true, it saddens me. In response to what I said yesterday, the government proceeded to quickly release funds yesterday (Thursday) to the House to enable the House to function. There is evidence to that and that is on record,” he added.

But Mr. Annoh-Dompreh insisted that not long after the Speaker’s comments that the money hit the account of Parliament, intimating that Mr. Bagbin had not been properly briefed.

According to him, not only had Parliament received its money, but also the National Health Insurance Authority also received GH¢50 million from the Finance Ministry.

Free SHS Enrolment Up By 50%