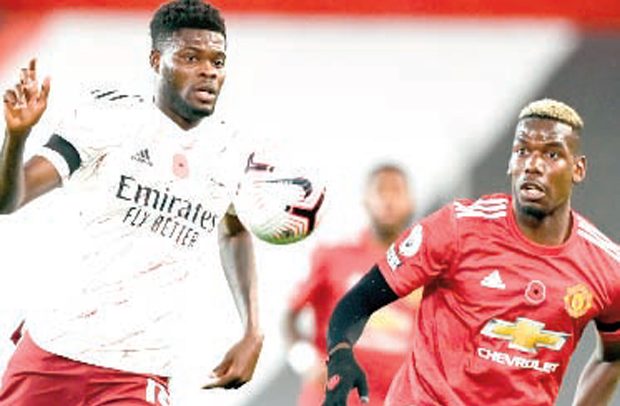 Ghana midfielder Thomas Partey has catapulted into global stardom after his heroics for Arsenal against Manchester United in the Premier League at the weekend.

The world is now beginning to take notice of his immense quality after he starred for the Gunners in their 1-0 win at Manchester United at the weekend.

Partey, 27, has been dominant since he joined Arsenal from Atletico Madrid where he has received widespread rave reviews over his quality.

With the global allure and stature of the English Premier League, the masterful performance of the Ghana international is gaining massive traction around the world.

Partey won the ball back more than anyone else on the pitch in Arsenal’s 1-0 win at Manchester United on Sunday – their first win at a ‘big six’ rival in 29 games.

The deputy Ghana captain has earned praises from several former and current stars after being compared to Arsenal legend Patrick Viera.

He starred as Arsenal defeated the Red Devils 1-0 at Old Trafford, their first victory at the backyard of their opponents in 14 years.

The former Atletico Madrid player was magnificent and effective for Arsenal, earning positive reviews across the footballing world.

America Has Sneezed: Will Ghana Catch A Cold?