A police officer on guard duty in Accra has reportedly shot himself in what believes to be a suspicious suicide.

Police confirmed the incident in a statement issued the same day saying that “The Ghana Police Service is investigating the circumstances surrounding the death of one of our own, a Police officer who allegedly shot himself while on duty today April 27, 2022, at the Graphic Road, Abossey Okai, Accra.”

However, the police said they are unable to reveal information on the deceased in line with the standard and procedure of the Service.

Below is copy of the press release from the police. 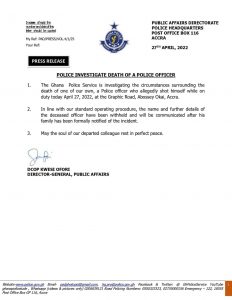