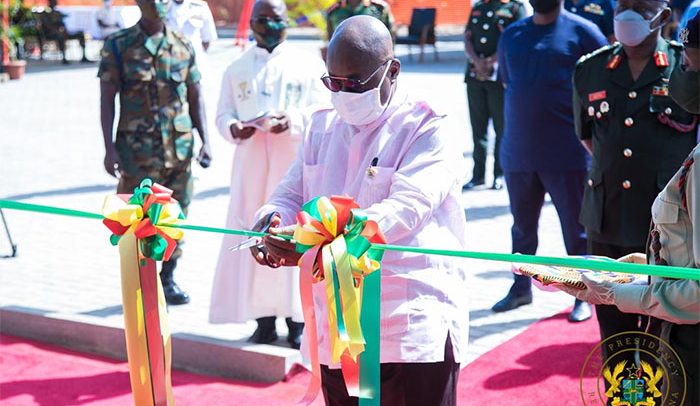 President Akufo-Addo, today May 12, commissioned the ‘New Douala Barracks’ at Burma Camp in Accra, whose construction commenced in 2017, as part of the Barracks Regeneration Project.

It will be recalled that upon his assumption of office, and in the Asempa Budget, President Akufo-Addo announced the institution of the ‘Barracks Regeneration Project’, to address the accommodation challenges of the Armed Forces, and, thereby, ease the discomfort that troops and their families have been confronted with over the years..

Commissioning the New Douala Barracks, the President noted that “over the last three years, we have worked diligently to improve the state of operational readiness of the Armed Forces, by retooling all the Services to enable you to perform your roles more efficiently and effectively.”

One plank of this welfare-enhancement package, he said, is the Barracks Regeneration Project, which has resulted in the completion of the ‘New Douala Barracks’.

“Today, 64 families will be the beneficiaries of four new blocks of 64 apartments. Each of these apartments has a living room, two bedrooms, a kitchen and standard sanitary facilities,” he said.

President Akufo-Addo continued, “It is gratifying to know that similar, on-going accommodation projects are near completion at the Airborne Force, Six (6) Infantry Battalion in Tamale, and other garrisons. In due course, they will also be commissioned, and I assure you that Government remains committed to dealing with the matters of accommodation of the Armed Forces.”

The President urged the Military High Command to ensure that these accommodation units are well maintained, and appealed further to the new occupants to make sure that these facilities stand the test of time.

Touching on the road network in the Barracks, President Akufo-Addo assured the Chief of Defence Staff, Officers, men and women of the Armed Forces that “the sod will be cut next week for the commencement of construction of phase 2 of Burma Camp Roads. Indeed, the list of all roads in the garrisons have been submitted to the Ministry, and, soon, work will begin on all the roads that are not in good condition. I have to redeem the pledge I made to you about your roads, and I am doing so.”