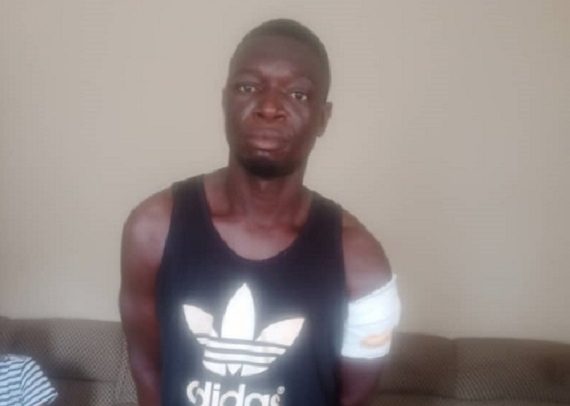 A 26-YEAR-old robber has been shot dead following a fierce gun battle between some suspected hoodlums and policemen at Bensri Mile 9 near Obuasi in the Ashanti Region.

The deceased, minutes before he died, gave his name to the police as Augustine, and his body has since been deposited at the Obuasi Government Hospital Morgue for autopsy.

During the shootout, another suspect, Anthony Nana Yaw Yeboah, was hit by a bullet but he managed to flee from the robbery scene, only to be arrested later on.

The Ashanti Regional Police PRO, ASP Godwin Ahianyo, who confirmed the case to the media, said a three-man robbery team had stormed Bensri Mile 9 on robbery expedition on Monday.

According to him, a police patrol team from the Obuasi Division spotted a motorbike parked in front of a stationery Toyota Corolla saloon vehicle, with the registration number AW 3404-14.

The police PRO indicated the police patrol team then saw the three suspects smashing the front passenger glass of the vehicle with a gun so they (police) decided to question them.

Before the police could get close, the hoodlums without provocation, opened fire on them and this forced the armed policemen to also return fire.

Sensing danger, the robbers fled the scene, leaving behind a single barrel gun.

Later on, some residents of the town teamed up with the police to comb a nearby bush, leading to the discovery of one suspect, who had been hit by a bullet during the gun battle.

The suspect was bleeding profusely and was rushed to the hospital for medical attention, but unfortunately he was pronounced dead on arrival.

Later on, the police had information that one of the robbers, who was also hit by a bullet, was receiving treatment in a certain hospital. Police then rushed there and apprehended him.

This suspect, who gave his name to the police as Anthony Nana Yaw Yeboah, has since been discharged from the hospital and sent to police custody, assisting in investigation.