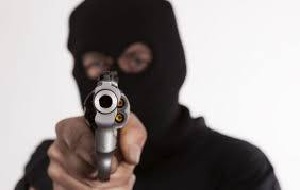 According to the Police, he was found lying face down with his hands tied to his back as well as his legs as his mouth was sealed and taped.

The Sege District Police Commander, DSP George Aboagye told the GNA that the local Police received a distressed call on that fateful day at about 5:30 am that a body was lying on the premises of the filling station.

“We inspected the body, took photographs and we lifted the body for preservation”.

A preliminary investigation revealed that the unknown assailants broke into the premises and murdered the man who happened to be the security man of the place and took away GHC15,000,” he said.

He said, their investigations led to the arrest of four suspects.

We have arrested the manager and his assistant, Solomon Sebbie, 20 and Emmanuel Vehe, 23.

We also picked up Emmanuel Sorgbordjor, 20, a pump attendant at the filling station and Buer Joseph, a taxi driver and a former worker who was sacked for mismanagement.

The body has since been deposited at the Police Hospital morgue.
GNA

Nigerian Jailed For Attempting To Register As A Ghanaian